Shareholder Voting Agreement: What You Need To Know

A shareholder voting agreement is a contract between two or more shareholders who share their rights to vote on a particular common objective or goal.

Shareholder rights have become an integral part of any corporate governance system. These rights ensure that the shareholders can raise their voice and opinions on the initiatives and corporate actions that might not be useful for them. Shareholders use their voting rights in making numerous decisions in a company such as choosing the board of directors, approving new securities, and making any considerable changes in the company and its operations.

Shareholders have the right to vote on corporate policies such as choosing directors, initiating corporate actions, and changing any aspect of the company’s operations, among other things. Provisions in the corporation’s bylaws govern the voting rights of shareholders. Shareholder voting rights differ from regular voting eligibility in this way. During shareholder meetings, significant policy decisions are voted on.

What is a Shareholder Voting Agreement?

There are specific requirements for this shareholder voting agreement which are as follows:

It is imperative to note that the voting rights agreements are valid only between the shareholders. One can elect directors at annual or special meetings and express their opinions to company management and directors on important topics that could influence the value of their shares. A voting agreement can be utilized in connection with a public company acquisition. This agreement lays forth the terms and conditions under which stockholders of a target company commit to voting in favor of a merger.

Why is a voting agreement important?

This agreement lays forth conditions under which stockholders of a target company commit to voting in favor of a merger. This Standard Document includes notes that include critical explanations as well as drafting and negotiation advice.

Significance of the voting agreement

A voting agreement to be utilized in connection with a public company acquisition. This agreement lays forth the terms and conditions under which stockholders of a target company commit to voting in favor of a merger. 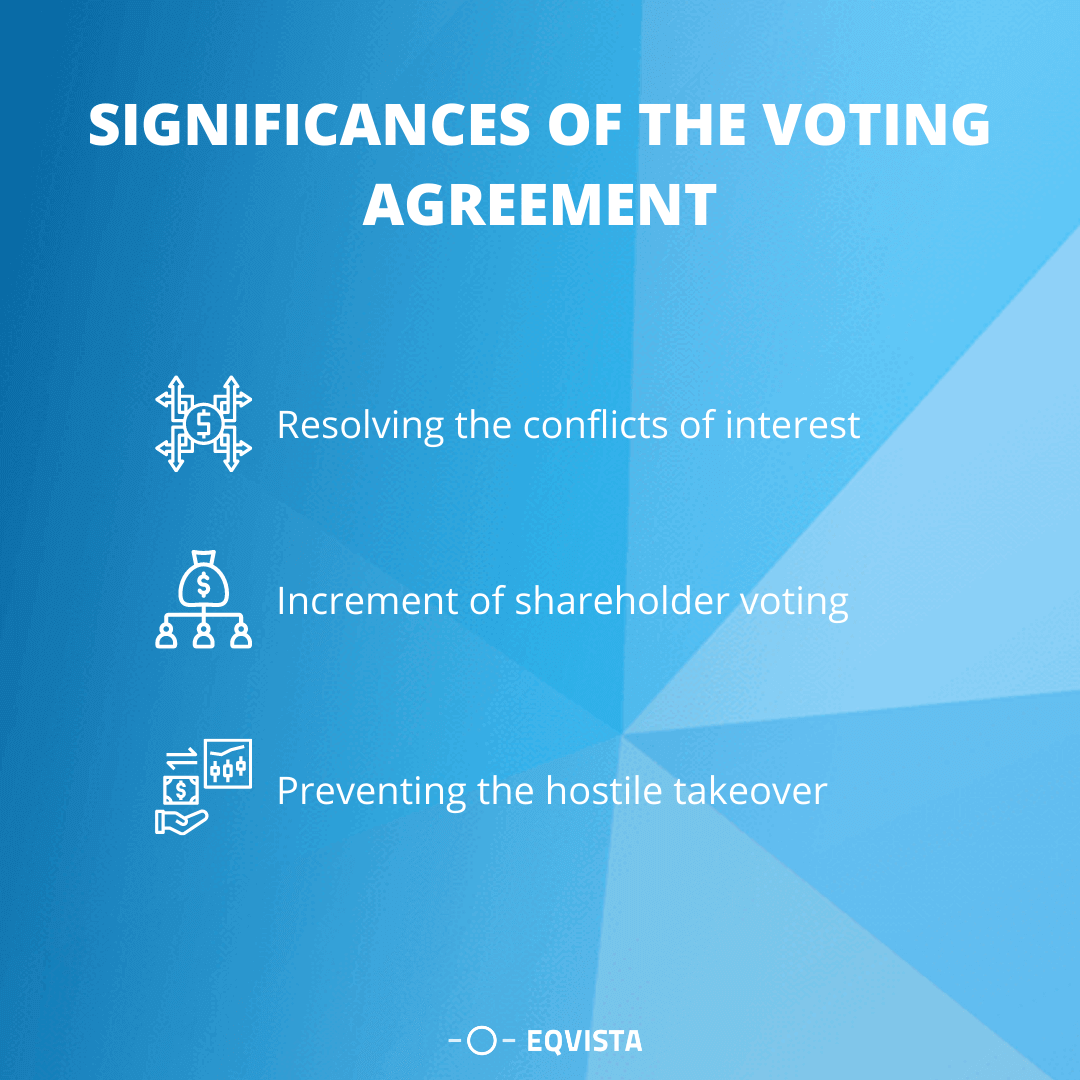 Resolving the conflicts of interest

A voting agreement enables the shareholders to take control of the operations of the business. It also gives them the power to put forward their opinions and participate in the decision-making. If there are any disputes between the shareholders and the company, this agreement gives shareholders an edge to resolve them.

The common approach is to transfer the shares to a blind trust that has no knowledge of the trust’s ownership and no right to vote. There is the minimal conflict of interest between the shareholders and the investments in this manner.

Shareholders can put their shares in a trust when a company is threatened with a hostile takeover. Because a substantial number of stakes are locked up in a conviction for a defined period, the practice discourages the firm from pursuing the takeover and attempting to purchase a significant chunk of the target company’s shares.

Here is a sample of the voting agreement template. 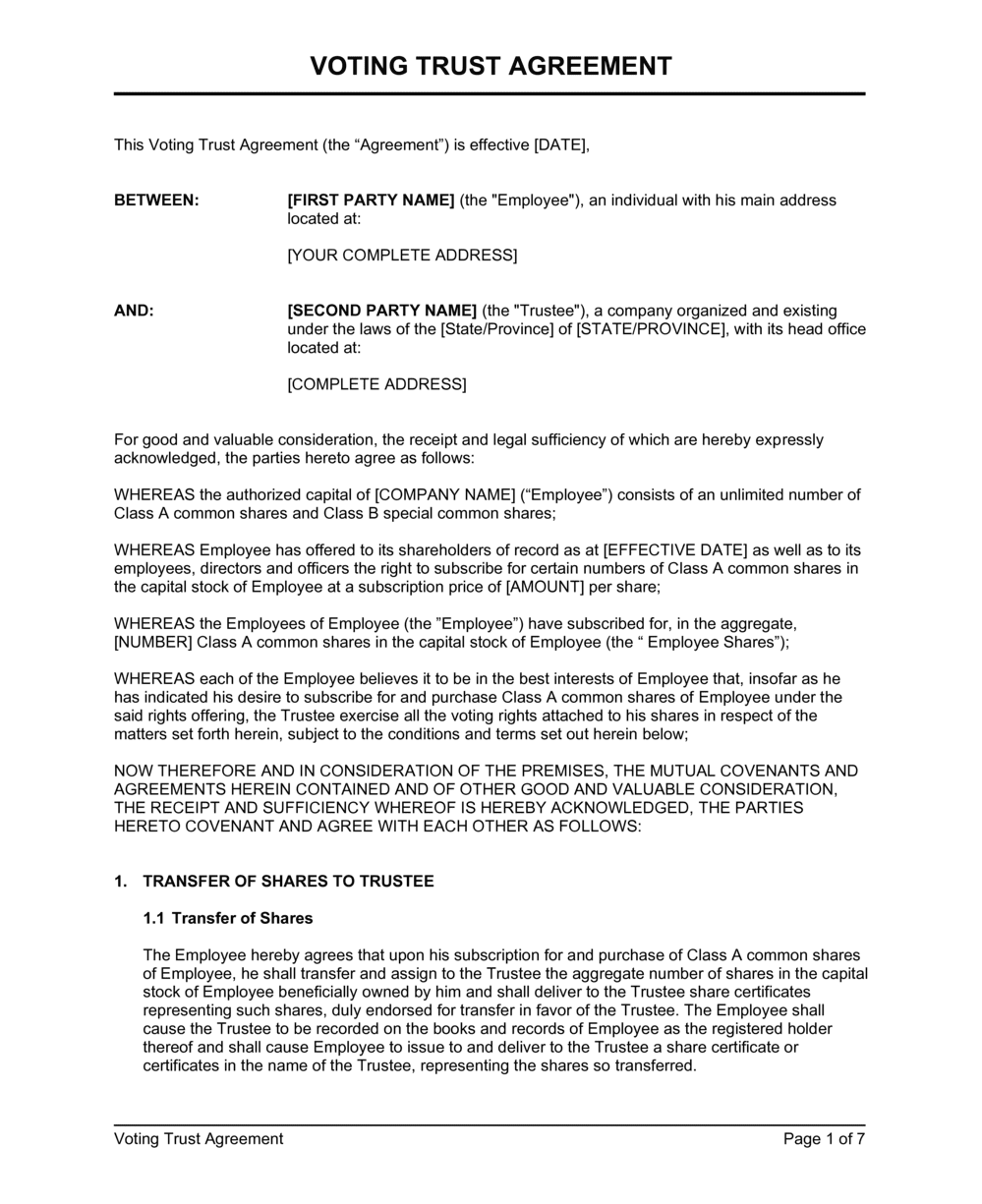 What is a voting trust agreement?

A voting trust agreement also goes under the name, pooling agreement. Two or more shareholders transfer their shares to a trustee under a voting arrangement. The trustee will then vote for those shares as a group following the agreement’s terms or the majority’s will. Shareholders in a voting trust have more voting power than if they voted independently.

Trustees are frequently required to vote by the preferences of participating shareholders.

A voting trust arrangement allows a shareholder to transfer his or her voting rights to another individual. A voting trust is established by a signed trust agreement in which the original stockholder transfers his shares to a trustee for safekeeping. Such arrangements aim to keep track of how the shares are voted on and give the trustee the right to do so.

A voting trust agreement requires the trustee to vote in certain ways. Section 6.251 of the Business Organizations Code provides:

How does a voting trust agreement work?

As a deterrent to hostile takeovers, voting trust agreements are normally managed by the company’s incumbent board. However, they can also be used to represent a person or group attempting to seize control of a corporation, such as creditors seeking to reorganize a failing company. Voting trusts are more frequent in smaller businesses because they are easier to manage.

In the same way that shareholders nominate someone else to vote for them, voting trusts are analogous to proxy voting. Voting trusts, on the other hand, work differently than proxies.

Upload Shareholder Voting Agreement with Board Resolution on Eqvista

Here is how to do it:

Managing the total shares and agreements is a complicated process and thus, it sometimes becomes difficult for the companies to maintain them. But with our application, we have made it super easy and convenient for you. Anyone who uses our application gets free training from us before starting the process.

We are here to help. Book your appointment and get a free consultation here.

Form 8594 - Everything you need to know Founder’s Guide to Equity Investment Agreement NVCA Term Sheet and Other VC Financing Model Documents Drafting a Profit-Sharing Agreement Effectively Guide to Making a 50/50 Partnership Agreement The Definitive Guide to M&A Deal Structure & Agreement 4 Steps in Making a Convertible Note Agreement Tender Offer & Its Effect on Investors Right of First Refusal and Co-Sale Agreement Shareholder Register Investment Agreement Term Sheet Share Transfer Form Subscription Agreement Founders Agreement Shareholders’ Agreement What is a share certificate or stock certificate? Stock Certificate Template Do I need to issue a stock certificate for my company? What is a Board Resolution and when is it required? Tips for Taking Minutes for a Board Meeting Voting rights of a Shareholder – Basic Guide