This agreement lays the groundwork for how the company’s control will be distributed among shareholders.

People often set up a new company and wonder what they will have to do next. This is where many people bring up things like company bylaws or shareholders agreement. For those who don’t know, a company shareholder agreement is vital for setting up an organization. However, similar to several business owners and founders, you might have some confusion about how a shareholder agreement works and what makes it different from a company articles of association.

Your organizational setup is a massive determinant of the legal documents you will require for upholding its shareholding composition and structure. In this piece, we will talk about shareholders agreement, helping you understand why it is important for every company.

Whenever a company has multiple shareholders, having a shareholder agreement becomes a necessity for protecting every individual’s rights. This agreement lays the groundwork for how the company’s control will be distributed among shareholders.

While there are different types of companies out there, it is worth keeping in mind that directors manage an organization’s day to day tasks and shareholders own a portion of the company. Because there are several roles and individuals that make up an organization, having the correct legal documents/paperwork is essential to ensure it runs smoothly. Here are a few things these documents address:

People who set up a business for the first time often believe that things can stay clear cut without a shareholder agreement, but as time passes, shareholders and other members of the organization encounter confusion and a barrage of difficulties, which is why you should always have a company shareholder agreement in place.

What is a Shareholders Agreement?

It also makes sure that the shareholders don’t have to encounter unfair treatment. Minority shareholders benefit from this agreement too, as they have very little control over how the business operates. A company shareholder agreement outlines the shareholder’s obligations and rights and lays out a blueprint for equal distribution of the shares.

As mentioned, drafting a stockholder’s agreement when issuing shares for the first time or setting up a company is a must. Why? Because it assists investors or entrepreneurs find common ground for what they can expect when it comes to receiving and providing to the business. If any investor faces difficulty settling a conflict and reaching an agreement, they may have to reconsider their alliance.

What’s more, investors can also draft a shareholder agreement later on’; however, doing so is not advisable as people’s expectations tend to diverge as time passes and reaching a harmonious consensus could become difficult.

Why is a Shareholder Agreement Important?

Because of these important reasons
, many founders choose to put a company shareholder agreement into place.

When Should a Share Agreement be put in Place?

In most cases, utilizing a shareholder’s agreement is a wise idea, especially when forming a company or issuing its initial shares. Some would even say that it is an excellent exercise for making sure that shareholders have a common understanding about what they can expect from the company. In case a shareholder has different opinions about their shares and role in the company, a company shareholder agreement can address this issue, making sure it doesn’t unsettle the company moving forward.

In some cases, investors tend to steer clear from discussing agreements to focus on other aspects of running the business. While this may seem like an effective strategy in the beginning, it rarely works, if at all. Sure, the investors may be planning to return to the share agreement later on, but it never works out. This is why investors and shareholders should ensure that they prioritize the shareholder agreement first, and focus on other aspects later.

Without a solid foundation, running a company can be very difficult and give birth to a variety of disputes. Company owners can easily avoid these problems from taking place by signing off on the share agreement at the very beginning.

A shareholder agreement contains plenty of key terms and clauses, and knowing them is vital for understanding how this agreement works. From non-competition clauses to issuing and selling shares, there are different terminologies present in these agreements, and knowing their meanings can help you draft a compelling shareholder agreement that addresses important elements of your organization. The following is a list of terms used quite frequently in shareholder’s agreements:

That said, this agreement does offer some level of protection to minority shareholders. For example, these shareholders have to provide approval for some decisions, without which the company can’t proceed with a certain deal or plan.

It must be clear by now that shareholder agreements should be drafted with great attention to detail. Leaving out even the tiniest bit of information could make it vague and create problems down the line. The following is a list of things to consider drafting a compelling shareholder agreement:

Be sure to review your shareholder agreement in these in mind, as they are crucial to making sure the interests of both parties are covered before the shares are delivered. 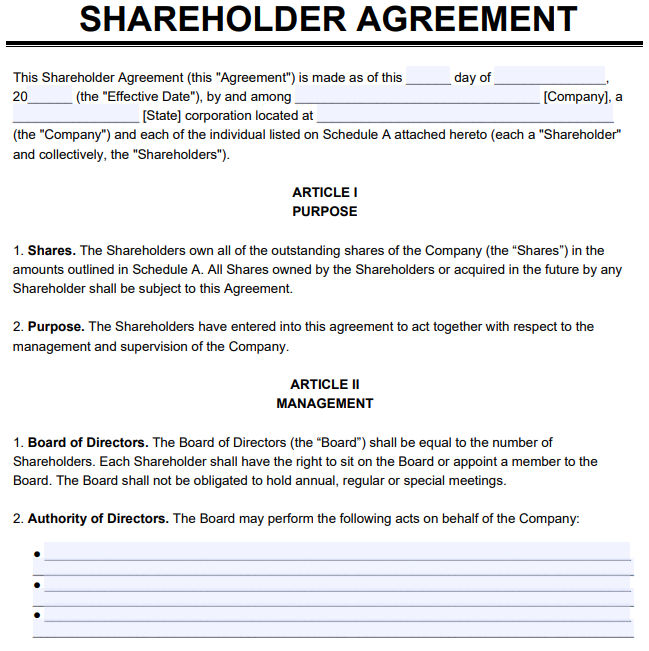 Generally, the first article of the agreement sample contains the purpose of the shareholder agreement. The second article details the organization’s management, along with details regarding the board of directors, limitations, and expenses.

Finally, the third article discusses the distribution of losses and profits among the shareholders. Sure, you may find several other details in a company’s shareholder agreement but these elements are present in almost all of them.

With the importance of shareholder’s agreement for a company, its better to keep these recorded in your company’s Cap Table. This is where the Eqvista platform can help. Our captable software will help store all your company documents and share access to these with your shareholder and other company founders, with a click of a button. Let’s see how it works:

Here is how a company’s Cap Table would look on the Eqvista platform. 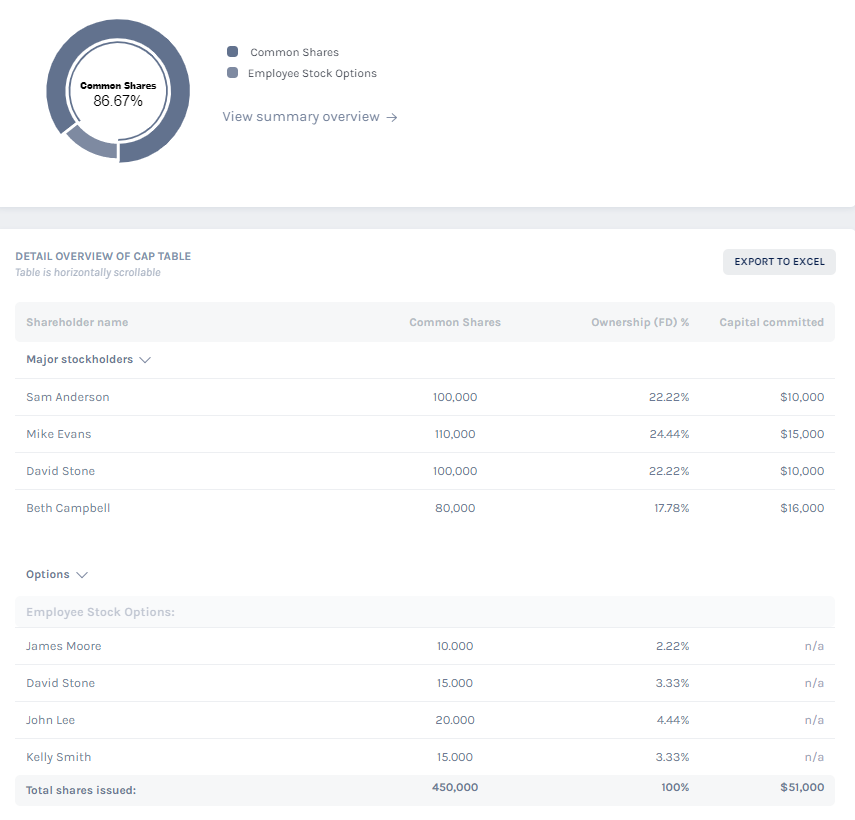 In this scenario we have 4 company founders and various option holders. Whereas before you would need to send countless emails to each shareholder and company admin for record keeping, on Eqvista, you can simply upload the documents to the platform and share with your interested parties.

From the Documents section, you can upload the shareholder agreement and share access to each party after typing in their name. You can even edit the name of the document, edit the title or type, and download it for later. 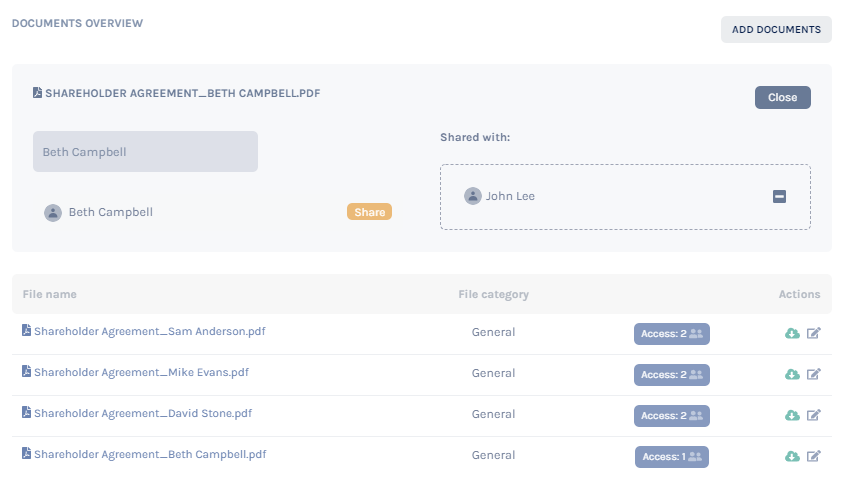 When it comes to high level companies, it’s vital to ensure that shareholders are aware of what they can and cannot do. It eliminates poor decision making and negative impact on the company’s business. This is why creating a well-written, detailed company shareholder agreement is important, as it can safeguard the company while keeping the shareholders in harmony. It’s equally important to record these documents in an organized Cap Table.

Eqvista is an advanced captable to fit your company documents need. With the platform, companies can easily issue shares, create stock option plans, and store and share documents to the shareholders and company admin. Read about our entire list of support articles here.

Form 3921 and Form 3922 - Everything you should know What is a Tear Sheet? 83(b) election - A Complete Guide for Companies How can digital signatures be helpful in business? Startup Term Sheet Template Form 8594 - Everything you need to know Shareholder Voting Agreement: What You Need To Know Founder’s Guide to Equity Investment Agreement NVCA Term Sheet and Other VC Financing Model Documents Drafting a Profit-Sharing Agreement Effectively Guide to Making a 50/50 Partnership Agreement The Definitive Guide to M&A Deal Structure & Agreement 4 Steps in Making a Convertible Note Agreement Tender Offer & Its Effect on Investors Right of First Refusal and Co-Sale Agreement Shareholder Register Investment Agreement Term Sheet Share Transfer Form Subscription Agreement Founders Agreement What is a share certificate or stock certificate? Stock Certificate Template Do I need to issue a stock certificate for my company? What is a Board Resolution and when is it required? Tips for Taking Minutes for a Board Meeting Voting rights of a Shareholder – Basic Guide