One of the world’s leading venture capital and private equity firms is Sequoia Capital. Sequoia Capital portfolio focuses mainly on innovation and technology, it is a challenging investor that has supported and funded more than 1,500 companies around the globe. They invest in many growth markets and in various types of services and products. Companies that are financially backed and incubated by Sequoia now control $1.4 trillion of the share market value. This astonishing list of companies makes up the top Sequoia investment portfolio.

In this article we will tell you more about Sequoia and the industries they invest in.

Sequoia is a venture capital firm based in the U.S. The Californian company focuses mainly on the tech industry, backing companies that presently control 22 percent of NASDAQ or $1.4 trillion of the combined share market. Sequoia has invested early in many big companies, the most noteworthy being Google, Youtube, Apple, Whatsapp, Paypal, Instagram, Linkedin, Oracle, and Zoom. Sequoia is considered as one of the top venture capitalists globally since they not only manage investment funds in the US, but also in Israel, China, Southeast Asia, and specific funds to India. The company has many branches, some of them in London, Mumbai, Tel Aviv, Hong Kong, Menlo Park, Beijing, New Delhi, Shanghai, Bengaluru, and Singapore.

In 2015 the chairman of the company was questioned about the lack of women partners. He argued that due to a majority of women electing not to study science in the US, there were only a few qualified candidates. He also said that the company will not lower their standards in order to hire women, they would have to satisfy the requirements already set. The chairman was heavily criticized due to this and in 2016 the firm changed its 44 year history and hired Jess Lee to be the first female investing partner. The first European office was opened in 2020 at London, UK and the firm hired Luciana Lixandru to take charge.

Sequoia has a very distinct and interesting manner of investing. Taking a close look at their operations we have a detailed picture of how, where and why they invest. Let’s take a closer look:

Since the firm was founded by Don Valentine, the company kept expanding, adding three geographical branches to it complementing the main branch in the US. The three branches Sequoia Capital China, Sequoia Capital India, and Sequoia Capital Israel together have raised 56 funds amounting to over $19 billion.

Sequoia Capital portfolio Invests mainly in startups that develop unique ideas in IT, Enterprise software, semiconductors, software, computing, security, mobile, and many more. They leverage their knowledge and experience in technology to finance, assist and advise new companies who look to expand and shudder markets worldwide.

Sequoia has invested in many companies but there are some companies that are quite important. Here are the top sequoia capital investments of 2022:

This list is compiled of data from CrunchBase, CB Insights and other online resources.

Out of all the investments made by Sequoia capital in 2022, here are some of the most important investment profiles:

It is a Swedish company that was founded on innovation and has captivated the attention of customers with its e-commerce payment solution. Sebastian Siemiatkowski and Niklas Adalberth, the founders of the company, started Klarna in 2005. Headquartered in Stockholm, Sweden, Klarna is one of the leading names in the FinTech segment. Klarna is a virtual payment method that enables customers to pay for their purchases in a secure, easy and efficient manner. While the recent funding round was closed at $800 million with a pre-money valuation of $59 billion on July 11, 2022, and the company had raised a total of $4.5 billion in funds during its history. The company was backed by Sequoia Capital and other leading venture capitals. As a result, Klarna strives to become the most popular and preferred payment method among the masses.

Nazım Salur founded the company in 2015 which is based in Besiktas, Istanbul, Turkey. Since its establishment, Getir has been focused on providing instant and on-demand grocery and delivery services. Catering to the daily needs of customers, Getir’s application allows users to order food, beverages, and other grocery needs in a matter of minutes. The application is designed as a real-time personal shopper, enabling live tracking, ordering and monitoring of deliveries. In its recent funding round, Getir raised $768 million for a pre-money valuation of $11.8 billion in Series E as on March 17, 2022. To date, the company has raised $1.8 billion from investors since its inception in 2015. With the aim of becoming the largest food delivery app in Turkey, Getir was backed by Sequoia Capital.

Elon Musk, the CEO of Tesla and SpaceX, founded the Boring Co. in 2016. The company is engaged in developing underground and high-speed transportation systems, with a view to thrive within the city’s development and urban mobility. Located in Los Angeles, The Boring Co. is working on a tunnel under the city to make public transportation faster and easily accessible to all. As per its latest funding round on April 4, 2022, The Boring Co. received $675 million in a Series C financing round with a pre-money valuation of $50 billion and a total equity funding of $908 billion. Sequoia Capital and other investors participated in the round, giving their support to the company. Therefore, The Boring Co. is likely to introduce a number of innovative and smart transportation systems in the near future.

Founded in 2016 by Max Rhodes, Faire operates as a fully-functional shopping platform, enabling wholesalers and retailers to connect at a global level, Basically, brands can buy product listings from local retailers and wholesalers for their product lines. Faire assists brands in identifying and managing their product listings from local retailers, increasing their visibility and acquiring new customers. Headquartered in San Francisco Bay Area, West Coast, Western US, Faire has raised $416 million in a Series G round at a pre-money valuation of $12 billion on May 10, 2022. While the total funding so far reached $1.7 billion, Sequoia Capital and other investors backed the company in its latest funding round. This shows that Faire is a billion-dollar startup with the potential to scale even further.

This American startup was founded by Job van der Voort in 2019 and is headquartered in San Francisco, California. Remote provides international payroll, compliance services, and benefits for remote employees and contractors. Having gained traction among employers and employees, Remote is the fastest-growing HR and payroll solution for the globally distributed workforce. This company is working on redefining the workplace and empowering the global workforce. On April 5, 2022, with its recent funding round, Remote raised $310 million in a Series E funding round at a pre-money valuation of $2.7 billion. Sequoia Capital and other investors participated in the round, which boosted the total funding to $496 million. It is likely that Remote will introduce a number of payment reforms and new strategies to encourage global mobility and workforce flexibility.

The company was founded by Christian Hecker, Thomas Pischke and  Marco Cancellieri in 2015, with headquarters in Berlin, Germany. Trade Republic is an online brokerage that provides all the financial services that are important to traders and investors. From investing in stocks, bonds, mutual funds, and other assets to day trading and cryptocurrency trading, the company offers a wide range of investment services. In its recent funding round on June 3, 2022, Trade Republic raised $250 million in a Series C funding round at a pre-money valuation of $5 billion. With this equity injection, the total funding of the company is $1.8 billion since its inception in 2015. Sequoia Capital and other venture capitals backed Trade Republic recently to support the company’s growth plans for future expansion and improvement.

Rippling was founded in 2016 and is based in San Francisco, California, United States. Parker Conrad, the founder and CEO of Rippling, is focused on providing human resource solutions to employers with its all-in-one HR software. Described as a full-service HR software and services company, Rippling claims to help companies connect with their employees in a better way. The company is backed by leading investors including Sequoia Capital and others. As of May 11, 2022, the company has raised $250 million in a Series D funding round at a pre-money valuation of $11 billion. The total equity funding is $697 million, which shows Rippling’s potential to expand further. Hence, Rippling is gradually emerging as a leading HR software provider for employers. 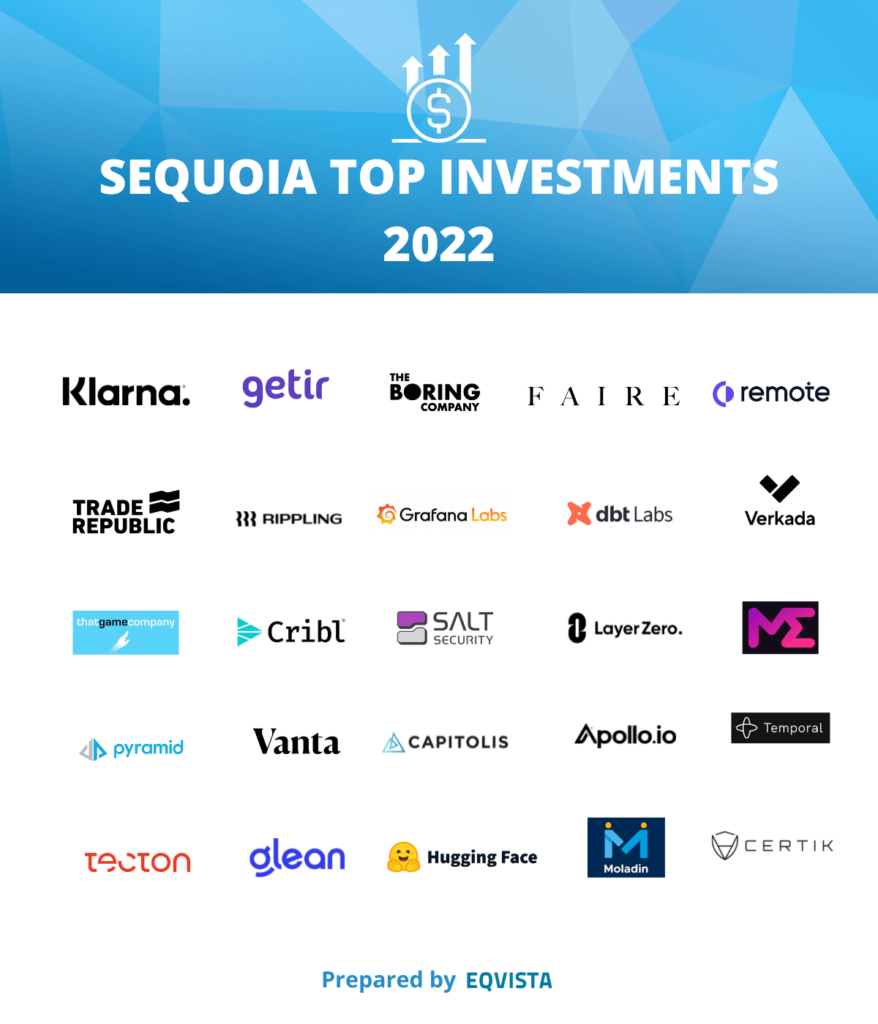 To conclude, it is no surprise that Sequoia Capital has been around for this long. They continue to grow with a team that is intelligent and possesses immense knowledge regarding their investments. This has led to the impressive list of top Sequoia investments.

If you plan to invest in equity, you would benefit from the support and knowledge of Eqvista. Our equity management platform has all the tools you need to manage your company equity and shareholders. We also provide 409a valuations for finding your company value. Visit our pricing page or contact us today!