Despite facing massive obstacles during the pandemic, private companies continue to grow. 2022 is turning out to be exciting for startups. More and more investors are funding small and medium startups that have potential in the innovative sector. Many industries have been on the rise, especially the tech industry. Recent data shows that this year the demand has been high for startups. This is not only proving to be an excellent opportunity for entrepreneurs but also for investors. As of now, 24 companies achieved unicorn status, 18 of which achieved this last December according to CB insights.

This year, interest rates are on the low and are expected to coast around there for some time, this presents companies with the opportunity to raise more funds. This encourages the whole startup scene this year, it also indicates that venture capital funding will be an influential force as liquidity is expected to be on the rise. Indicating that money is going to flow into such companies. With easy access to funds, many private companies are expected to attain unicorn status. Unicorn companies are also expected to cross the decacorns threshold. Like the Unicorn threshold, the decacorns threshold indicates when a private business’s net worth reaches the $10 billion mark.

Startups or companies in industries like the tech sector often tend to cross thresholds such as the billion-dollar mark. When they do and are worth such amounts, they are given certain titles.

What does a unicorn company mean?

When a venture capital company’s net worth reaches the billion-dollar mark, they are called a “unicorn” company. Aileen Lee, the founder of CowboyVC, popularised calling privately held companies that achieved this threshold as a Unicorn company. Within the human resource sector, a recruitment marvel is also referred to as a unicorn. When hiring, HR managers have high expectations. They often tend to look for candidates with higher qualifications than what is required for the position. In other words, managers look for a Unicorn. This creates a gap between the expectation of the ideal candidate and the available candidates.

Features of A Unicorn Company

It is not easy for a company to achieve unicorn status, but some do. Each of these companies that achieve this status has things in common. Here are the features of a unicorn company.

How many unicorn companies are there globally?

With a failure rate of 70-80% of startups within the first five years of operations, achieving a billion-dollar net worth is not an easy task. However, some companies have managed to do so despite the hurdles. The world of venture capital is booming, leading to many startups and companies achieving this threshold. Recently, the beginning year saw 66 new startups reach the unicorn mark. This makes a total of 670 unicorn companies up to April 2021; combined, they are worth just under $2 trillion.

In March 2022, unicorn companies collectively raised around $14 billion in funding, which is a slight decrease to the funding in February 2022 (amounting to $15 billion). The fastest company to unicorn was Aptos in March 2022, which was founded in December 2021 by former employees of Meta. The company closed its first funding of $200 million at a $1 billion valuation – instantly becoming a unicorn startup.

Number of Unicorn Companies over the past years

Over the last five years, there has been an increase in the number of companies that achieve unicorn status. Many of them have done so by providing a unique and innovative product that changes the normal way one would think. SpaceX is one example, they are not only working on Starlink that provides a better internet, but they are also working on space travel by creating reusable rockets. This drastically reduces the cost of travelling to space. Such innovative ideas and development is the reason these companies rise to this stage. Over the last 6 years, the number of unicorn companies has been on the rise. In 2016, 23 companies achieved the status, in 2017-56, 2018-122, 2019-123, 2020-119, and in 2021- 186.

Now that you have a good idea about the number and what makes a unicorn company, we have compiled a complete list of the top 100 unicorn companies by valuation.

Bytedance is a multinational company founded by Zhang Yiming in 2012 that specializes in internet technology. Bytedance net worth is $140 billion.  The company’s legal domicile country is the Cayman Islands, with its headquarters situated in Beijing. They developed various social media applications like Douyin and TikTok. In 2017 the company acquired Shanghai-based company Musical.ly for $1 billion. They also acquired Flipagram and then merged it all into one global application with the TikTok name. Bytedance raised around $7.4 billion in funds from investors including General Atlantic, Tiger Global Management, Softbank, and Sequoia Capital China over six rounds.

Stripe is a SaaS and financial service provider that is worth over $95 billion with headquarters in California, San Francisco, and Dublin. They offer e-commerce websites, payment processing software and application programming interfaces. John and Patric Collison, Irish brothers, founded Stripe in 2010 with the name /dev/payments with seeding funds of $2 million from Peter Thiel and Elon Musk, PayPal’s co-founders. They later received funding of $2.2 billion over eight rounds from investors and venture capital firms. SV Angel, Andreessen Horowitz, Tiger Global Management, and Sequoia Capital were part of the investor team.

Space X or Space Exploration Technologies Corp. is an American company that specializes in space transportation and aerospace manufacturing. The company was founded in 2002 by Elon Musk, and his goal was to reduce the cost of space transportation and make it easier for man to colonize Mars. The company raised funds from various rounds from investors such as Scott Banister, Musket Research Associates, Rothenberg Ventures, and many more. They raised $5.9 billion during the funding rounds from various investors such as Google, Threshold Ventures, etc.

Didi Chuxing is a China-based company that provides customers with vehicles for hire. They have over 550 million users and millions of drivers. Didi provides transportation services through an app; some of their services include bike-sharing, car-hailing, social ride-sharing, and private car-hailing. On the other hand, they also provide automobile services which include financing, leasing, maintenance, electric vehicle charging, etc. Cheng Wei founded the company Didi Chuxing in 2012. The organization raised funds of over $22.7 billion over its lifetime through various rounds. They started with debt financing and later on transferred to equity financing. Some of the investors are Apple, GRS ventures, Alibaba, SoftBank, etc.

Founded by Apoorva Mehta in 2012, Instacart is an American company that provides grocery pick-up & delivery services in Canada and the US. These services are offered to customers through a mobile app and a website. This application allows customers to order groceries from partnered retailers. The shopping is done by a personal shopper who also delivers the items to you. Originally Instacart was launched in San Francisco with seed funds of about $281.7 million. Over the various funding rounds, they raised $2.7 billion over their lifetime.

Daniel Dines and Marius Tîrcă founded UiPath in 2005 in Romania. The company changed many times over its lifetime. It also included a Desktop Automation Product line in 2013. UiPath is now a New York-based global software company. They help develop platforms for robotic process automation. Led by Earlybird Venture, UiPath has an initial seed funding round of $1.6 million. In total, they raised $1.95 billion in funding for the organization over its life.

Global Switch is a company that provides data centers to its customers with high standards, resilience, connectivity, and scale. Owned by the Ruben brothers, the company is a builder of such data facilities located in Tier cities across Asia-Pacific and Europe. They offer a carrier-neutral status to their customers, enabling them to connect directly to a network of their choice. They initially choose to raise funds through debt financing before they enter the secondary market. Investors like Shagang Group invested in the business in the beginning. Overall the company raised $4.9 billion in funds over its lifetime.

Databricks was founded in 2013 by Patrik Wendell, Andy Konwinski, Scott Shenker, Ion Stoica, Matei Zaharia, Reynold Xin, and Ali Ghodsi. They are also the founders of Apache Spark. Databricks is a software company that has created MLflow, Koalas, and Delta Lake. These are popular open-source projects that cross data science, machine learning, and data engineering. They develop web-based platforms that work for Spark and provide IPython-style notebooks & automated cluster management. With over 28 investors, they have raised over $1.9 billion in funds. Their main investors are Andreessen Horowitz, New Enterprise Associates, and Franklin Templeton Investments.

Founded in 2009, Rivian is an American automotive company. They focus on developing vehicles, products, and services based on sustainable transportation. With facilities in California, Vancouver, Michigan, Illinois, and Plymouth, they focus on the production of electric cars. The founder and CEO, Mr. Robert. RJ. Scaringe graduated with a doctorate in mechanical engineering from the Massachusetts Institute of Technology. The organization started with debt financing in the early years for seeding before adopting private equity funding rounds to raise a total of $8.2 billion in funds. The company’s major investors are Amazon, Ford Motor Company, Standard Chartered Bank, and T. Rowe Price.

Nubank was founded in 2013 by an American Edward Wible, Brazilian Cristina Junqueira, and a Colombian David Vélez. It is the largest fintech in Latin America, with its headquarters located in São Paulo in Brazil. They also have an engineering department in Germany and Mexico. Nubank offers various products and services like NuConta, international credit cards, and loans. The factor that differentiates Nubank from other credit card providers is that they provide the entire service through a mobile application. They have gone through various seeding and fundings rounds to raise $1.5 billion from major investors like Tencent, TCV, Tiger Global Management, Goldman Sachs, GIC, Whale Rock Capital Management, and Invesco. 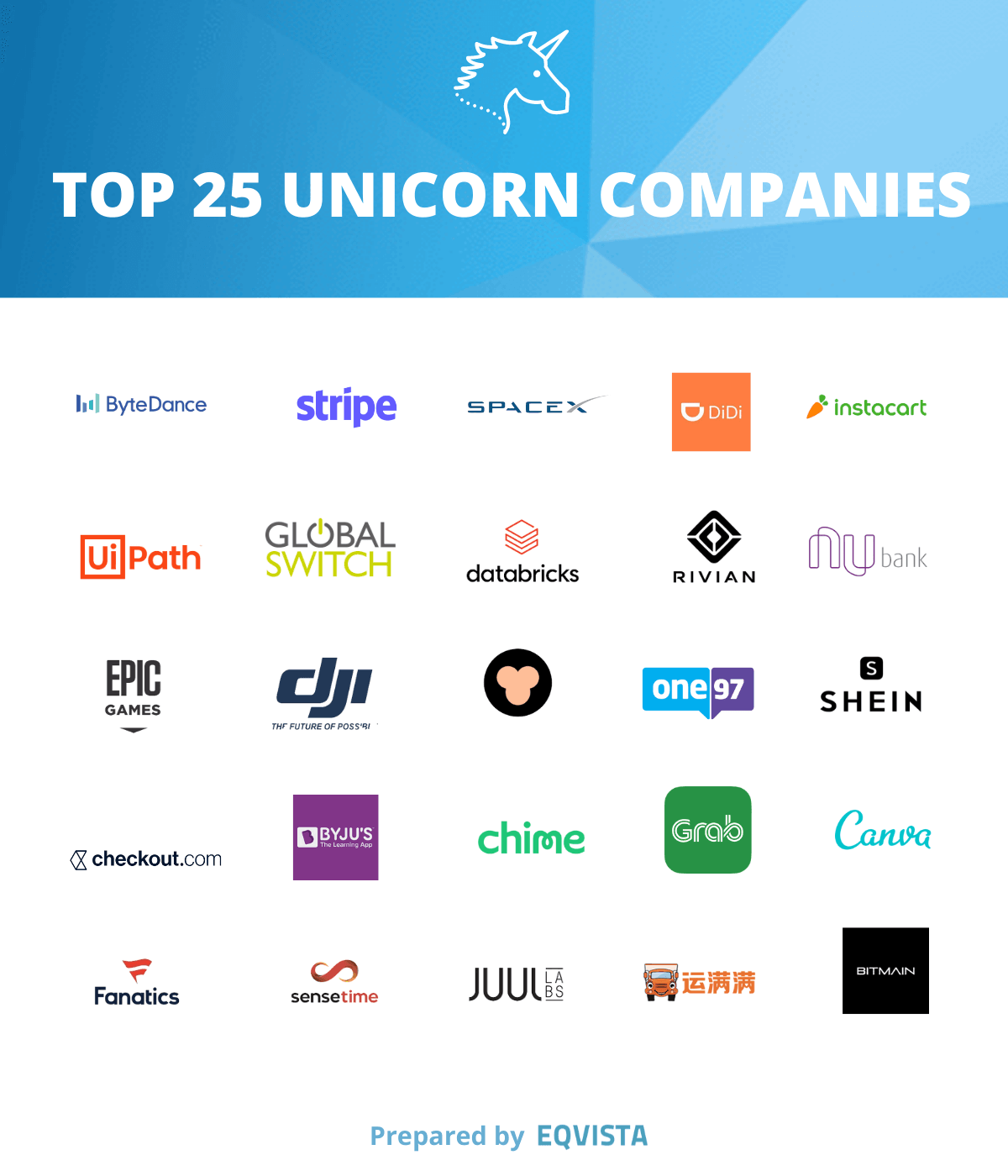 Unicorn companies are successful due to the funding they received. The more funding, the more products and projects a company can offer. Here are the top 10 funding amounts that these companies have received in 2021:

Some of the most successful startups get funding from different sources. Funding can come from VCs, angel investors, and other investors looking to invest in promising projects. The following table shows the 10 highest total funding amounts that some companies have received:

Raising funds is an essential part of any private business, let alone a unicorn company, and should be done professionally. One way to keep track without any mistakes is by issuing them through the use of the software. Eqvista is a tool through which you can issue shares to your shareholders accurately. Not only will you be able to see the summary of the shareholders through our dashboard feature, but you can also see and manage your cap table through the same tool.

Here is a step by step guide on how to issue shares on Eqvista:

Step 1: Login into your Eqvista account and select the company in which you want to issue shares to investors. Once you have selected the company you will be directed to the dashboard.

Step 2: Now you will have to select the securities option to the left of the screen, then choose equity.

To issue the shares you will have to click on the option issue grants at the top right of the screen. Then on the next page, select the share class name in which you want to issue the shares to investors, and add new grants.

Once you have completed filling the form, click on submit.

Interested to learn more about the top unicorn companies?

Companies raise funds to either expand or fund their daily operations; this allows them to grow and reach a wider range of customers and should be done professionally. Eqvista is a professional platform that not only allows you to issue company shares but also track them. You can also use other tools to have cap table management, 409a valuations, and manage your shares. Contact us today!