Scenario Modeling – Everything you should know

The purpose of this article is to give you a detailed understanding of scenario modeling.

In scenario modeling, various possible outcomes of a situation are identified and analyzed with respect to their relationship and impact on the overall outcome. These scenarios are then arranged into a sequence of decision points that represent the best possible decision paths for the company. With the help of scenario modeling, mergers, acquisitions, funding rounds, and strategic moves can be planned and executed in a precise and effective manner. Thus, scenario modeling is a comprehensive approach to the forecasting of the future and is most useful when there are multiple possible outcomes that need to be predicted.

What is financial modeling?

Financial modeling is a simulation of a financial activity in which the decision-making process is laid out using numerical estimates. It basically involves forecasting the future (assumptions) and modeling financial events to evaluate the outcome of those forecasts. In simple words, financial modeling is the process of developing a suitable model based on numerical data, historical data and other relevant information to predict the financial performance of an organization. Further, it implies the company analysis of the probable result and the effect of different variables on financial performance.

What is scenario modeling?

Scenario modeling is a technique of analysis and forecasting wherein all future probable scenarios are identified with respect to their relationship and impact on the overall outcome. During the decision-making process, scenario modeling can be used to help in the identification of risks and opportunities for the organization. From exit strategies to merger and acquisition, business planning, funding rounds, scenario modeling can be used to create a smooth transition during each event. As a result, businesses will be able to stay on course and prepare for any contingencies that may arise.

Therefore, these questions form a framework that when followed correctly, will ensure that the right decisions are made and that the desired results will be obtained. As such, scenario modeling is a reliable and effective way of decision-making and analysis. 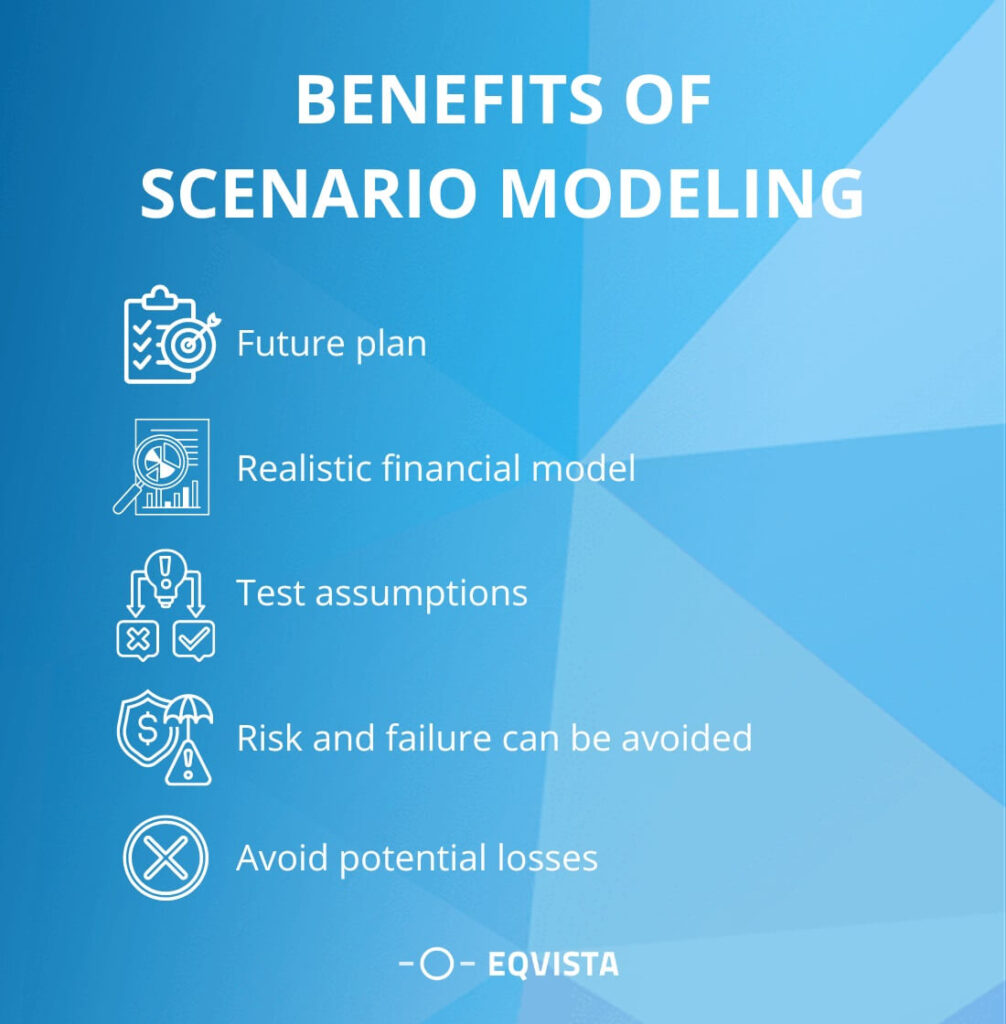 To better understand scenario modeling, let us look at an example. For instance, an institution seeks to improve student satisfaction while strengthening its financial viability. This necessitates that they look at various pricing methods such as tuition fees, inflation, and other aspects that might affect students. Further, the institution would establish its baseline before doing a compelling scenario analysis so it could compare various options and results.

To choose the optimal course of action, they must then calculate every situation that could occur. As a result, considering all possible outcomes ensures that the college makes the best decision possible which increases student enrollment and retention rates.

How to do scenario modeling analysis?

Now that we have a better understanding of scenario modeling, let us look at how to apply this in real life. As a business, the following are the steps that you need to consider:

Scenario analysis in Excel vs software

Why is using software the best choice for scenario modeling?

Well, the business environment demands a fast and efficient approach to any business activity. Relying on traditional methods or tools may not be the right choice in this regard, hence it is important to consider using advanced software that integrates real-time scenario analysis. These softwares make scenario analysis an easy process, and they offer robust features that make it an effective option as well. That being said, it is important to note that the overall effectiveness of scenario analysis depends on the software that you choose.

How to do scenario modeling analysis in Eqvista software?

As you know, choosing the right software is one of the most important aspects that you need to consider before performing scenario modeling. There are multiple options available online, however, Eqvista offers advanced software for scenario modeling. It is a robust tool that makes scenario analysis an easy and effective process, and therefore it is one of the best choices available online. You will not just be able to analyze various scenarios effectively; it also allows you to produce high-quality reports as well. With Eqvista’s scenario modeling software, you get a complete package to carry out scenario analysis.

Conduct your scenario modeling with Eqvista!

More about What is equity in a business?