ICO valuation – What the blockchain industry should know

In this article, we will discuss a few ICO valuation methods to clear some common tokenomics-related doubts in the blockchain industry.

With Initial Coin Offerings (ICO), we are seeing the birth of a new phenomenon that has seized the digital industry and is transforming the way start-ups fundraise for business capital. Businesses and new ventures are moving away from initial public offerings (IPO), crowdfunding, or seeking the support and involvement of venture capitalists. However, with many ICOs failing, it is difficult to determine whether a token is a worthwhile investment. Tokenomics is an essential component of an ICO. Crypto token valuations are problematic. If you’re wondering how ICO valuation work, there is no common approach for performing ICO valuation. But in this article, we will discuss a few ICO valuation methods to clear some common tokenomics-related doubts in the blockchain industry.

The value of cryptocurrencies have changed significantly, especially throughout most of 2018 and into 2019. During this time, Bitcoin was significantly lower than its all-time highs, making the period a “Crypto Winter”. Also at this time, valuations have gone up significantly. Furthermore, crypto tokens and virtual currency, as well as their marketplaces, remain in their early stages.

Valuations might fluctuate greatly from one trade to the next on a daily basis. Prices’ veracity may be called into question due to reservations about certain exchanges or frauds. These considerations make valuing cryptocurrency and ICO difficult. Nonetheless, proper digital asset valuation is vital for a number of reasons, especially income taxes, inheritance, and gift tax considerations.

What is the initial coin offering (ICO)?

A cryptocurrency and blockchain initial coin offering (ICO) is a sort of fundraising event. The ICO may be thought of as a cryptocurrency-based initial public offering (IPO). However, the two fundraising efforts differ significantly. An ICO is typically used by startups to raise funds. The important benefit of ICOs is the elimination of the need for financial middlemen in the capital-raising procedure and establish direct links between the firm and investors. Furthermore, both sides’ interests are linked.

Before you decide on doing an initial coin offering, it’s important to identify the different types of ICO that you can do. Once you figure out which is the most suitable type of ICO for you, then you can proceed with the steps into the ICO. The types of ICOs are as follow:

Steps to take for an ICO

An initial coin offering is a complicated procedure that involves a thorough understanding of technology, business, and the law. The primary concept behind ICOs is to use the decentralized nature of blockchain technology to secure funding in ways that coincide with the interests of multiple stakeholders. Following is a list of the steps in an ICO: 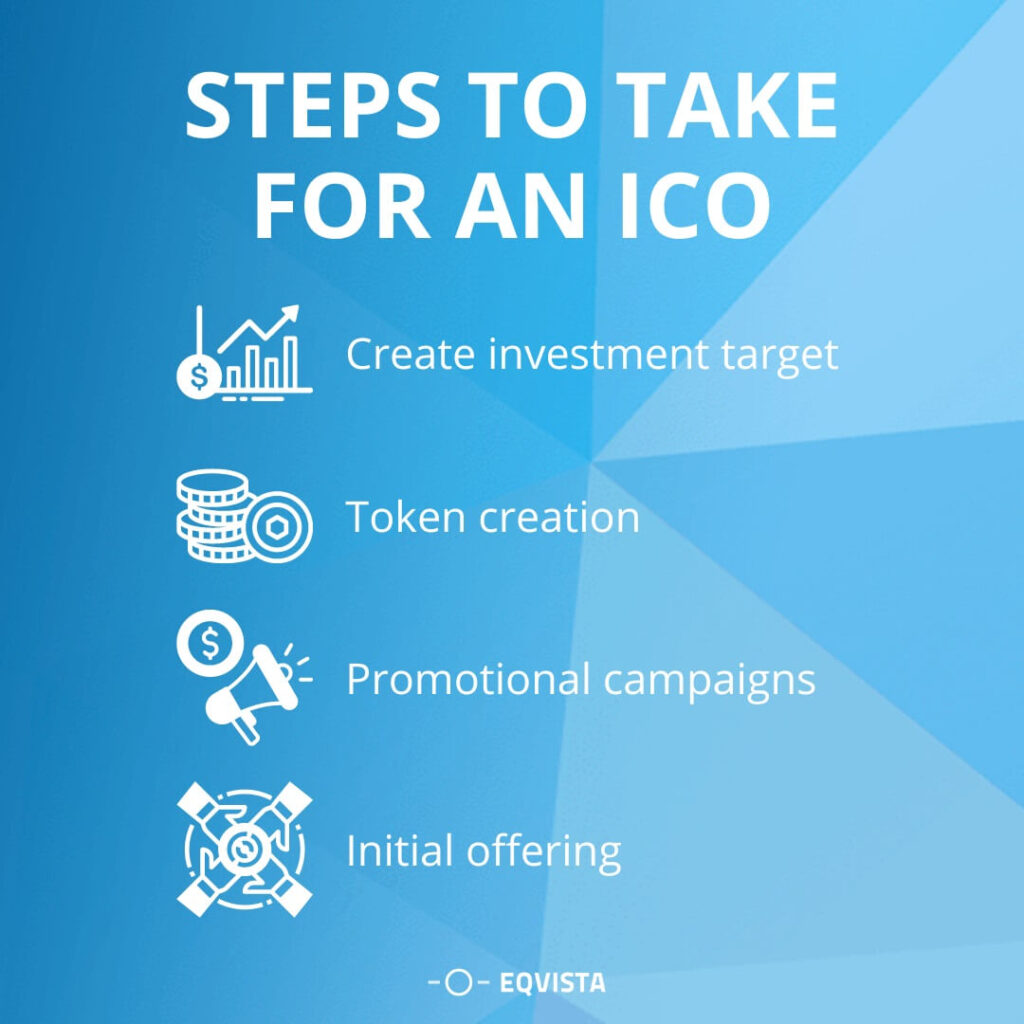 There are some things that an initial coin offering provides. Here are some features of an ICO to consider:

ICO rules and regulations you should know

Recent capital-raising procedures have been significantly impacted by the emergence of Initial Coin Offering. However, the arrival of the new fundraising model in finance caught regulatory agencies everywhere off guard.

Different nations take different approaches to the regulation of initial coin offerings. Along with the United States and Canada, several European nations are developing special legislation to control the operation of ICOs. In addition, ICO regulations have already been established in a number of nations, including Hong Kong, Australia, United Arab Emirates (UAE), and New Zealand. However, ICOs are not permitted in China and South Korea.

Difference between IPO and ICO

Initial Public Offering (IPO) raises funding for firms seeking investment and leads to the issuance of stocks of a company’s equity to investors. Crypto firms generate funding in Initial Coin Offering by selling coins or tokens.

The key distinction between Initial Coin Offering and an Initial Public Offering is that investment in an ICO does not guarantee ownership of a project or business. While investors in both circumstances are enthusiastic about the firm or the tokens and invest with the expectation that the asset’s worth will rise over time. Investors in an Initial Coin Offering are simply hoping that a now worthless currency will eventually appreciate in value over its initial cost of purchase.

Advantages of raising money through ICO

The benefits for organizations seeking funding using ICOs include:

In contrast to firms that raise funds through IPOs, the project, economy, or DAO is not always liable for direct taxing.

Investors base their investment decisions on the substance of white papers issued by the fundraising organization, and transactions of coins or tokens are straightforward, including many rounds, with few or no intermediates necessary in the procedure.

Valuation is the analytical process of determining an asset’s current or anticipated worth. There are various valuation approaches; nonetheless, each methodology has the potential to generate a different outcome, and one strategy could be more suited than the other depending on the asset type and organization. While there is no predetermined method of ICO valuation, several business valuation methods can be used to determine the value of tokens launched during Initial Coin Offering.

Token economics is a branch of economics that investigates the economic systems, regulations, and ethicality of tokenized commodities and services manufacturing, sale, and use. To have value, any cryptocurrency must provide an incentive for consumers to keep that token. This, in turn, increases demand for the token, resulting in a price increase. The top 100 paying Tokens have four economic models. These are the models-

Does ICO valuation get influenced by anything?

Why need a valuation model for ICO?

Tokenomics is an essential component of an ICO. Token values are difficult. With so many ICOs failing, there is a lot of doubt about the viability of the investment. ICO is gaining prominence as the organizational design for the future economy. This is supported by the fact that ICO funding outpaced early-stage venture financing in the second half of 2017. We must have shaped our financial understanding to better fit this emerging economic and corporate paradigm.

In conventional finance, there are several asset pricing models and valuation procedures that may be used for crypto asset valuation. Let us understand them briefly.

When valuing crypto assets, we use P x Q to represent the utility (i.e. GDP) generated or demanded using the token. To use the above equation for crypto asset valuation, we must tweak it slightly so that both ends of the equation are evaluated using the same currency.

The federal estate taxes system is heavily reliant on valuation. The IRS released Notice 2014-21 in 2014, which gives limited advice on various tax problems relating to certain cryptocurrencies. It is both restricted in extent and direction; it specifically states that convertible virtual money is classified as property rather than money for federal tax purposes. The Notice fails to appropriately address several critical tax concerns, including value. Furthermore, the Notice does not cover all valuable digital items. There have been no particular court rulings concerning cryptocurrency and federal income tax or estate tax concerns.

Get your ICO valuation from the expert team of Eqvista!

Obtaining an ICO valuation is advantageous for your firm for a number of reasons. You can utilize the report to raise funds for your project, DAO, and attract a large number of venture capitalists and investors. Eqvista can help you with your ICO valuation. With a team of highly qualified analysts, you can guarantee the best valuation for your ICO. Contact us today to learn more about our valuation services!