Token Vesting – Everything you need to know

To clear the air on Token vesting, this article shall provide a comprehensive description.

Each blockchain project must raise money during its development to make sure it will operate successfully once it has been launched. In light of this, token vesting is important for most blockchain projects’ fundraising efforts as well as for retaining its investors for a sustainably longer period. Even while vesting is quickly taking over most DeFi and DAOs, some people are still unsure of what it entails. Several people have said that they found it perplexing. To clear the air on Token vesting, this article shall provide a comprehensive description. Taking the reader through various aspects that hold value in the spectrum of Token Vesting and its co-existing impacts on crypto & its further technical inclusions under a token vesting contract.

Vesting denotes the practice of entrusting the care of an asset to a 3rd party via the means of a token vesting contract. Vested tokens typically belong to project team members, partners, and consultants. They can also belong to investors who purchased tokens before their general sale and other individuals who contributed to the project’s development. These tokens are gradually released over the token vesting period as the project moves forward, possibly once a month, once a week, or even every day as a part of the token vesting contract.

Vesting in cryptocurrencies is widely utilized to secure team members and other project participants’ long-term commitment to a project. It ensures that the project owners have an economic motivation to keep developing the project, which increases the confidence of potential investors in the company.

Returning to DeFi, token vesting, also known as token lock-up, is the process of removing a specific portion of the total number of tokens from circulation. These tokens are frequently released over a predetermined time frame, which is typically years stipulated via a token vesting contract.

Understand the history of vesting

Token vesting has its origins in traditional finance, just like certain other DeFi concepts. Gaining popularity after being considered and applied as a labor policy. Which is the practice of setting aside a percentage of their income & granting the sum of the same on their retirement to encourage its Employees to stay for a longer period through vesting.

The Tokens vested serve a purpose that binds its distribution plan & especially its tenure to play a crucial role. That brings us to the most frequently used term in Vesting, ‘Cliff‘ is a periodic lock applied to tokens before the token vesting period. Investors in private sales and seed capital are its primary users. As the phrase is now obvious, the kinds of vesting are as follows–

Why is token vesting important?

For its extreme volatility, the cryptocurrency market is unlike any other. The enormous price increases brought on by the buzz surrounding the new projects are another cause of these tremendous sell-offs, which frequently occur after an Initial Coin Offering (ICO), or Initial DEX Offering (IDO). During an ICO and IDO, the token is distributed via a decentralized liquidity marketplace or a crowdfunding period because the project owners or early investors sell their tokens as soon as they are available on the market. The token will have a big surplus supply as a result, which may cause sharp decreases in price.

Hence, the importance of token vesting comes into the whole framework, as without token vesting & a token vesting contract, from the date of the token generation event, a single or a small group of people or organizations can possess a sizable portion of the project’s tokens. This gives them the power to immediately induce supply variations, which might eventually undermine the token’s ecology and price. This would pose a serious risk to the stability of the token.

To take it to the next level, a vesting provides an employee an interest in the company’s success and a financial incentive to stay in the company (within the vesting period). To prevent a sudden drop in price from everyone selling their tokens at once, vesting is often utilized in token allocation. If an employee were to wait through the vesting term, cash out their tokens, and then start looking for a new job, the company would be in a difficult spot. No doubt the requisite time period for vesting has achieved the desired effect.

This has prevented the tokens from being traded immediately and encouraged the employee to remain with the company for a set period of time.

Importance of vesting for VCs and capitals

Due to the comparatively massive volumes sold during early-stage rounds, projects may encounter extreme selling pressure after the IDO and after the token has been posted on Centralized Exchange – CEX / Decentralized Exchange – DEX. It significantly lowers the price of tokens by increasing the total amount of tokens in circulation. Being a relatively new technology, blockchain needs enough time to develop and provide something. To fulfill use cases and ultimately provide inherent token value, projects that are funded through IDOs typically put a lot of effort into attracting audiences. As a result, it calls for patience, which vesting excels at.

The concern over losing token control to a few VCs or capitalists on exchange listing is eliminated. If such takes place, a group of investors with higher shares can manipulate the token price in any way they choose, destroying the ecosystem of the project. As a result, vesting has evolved into a crucial component of token economies that influences all types of investors’ investment choices.

The token vesting period, also known as the token lockup period, is a time frame during which tokens that were sold at the presale ICO stage and given to partners and project team members as rewards for their work cannot be sold. The project has specified a vesting plan, also known as a token vesting contract, for releasing these tokens throughout a specific time frame.

Why do you need a token lockup?

For the Token Economy to stay sustainable & effective, the majority of tokens must be kept by investors rather than being sold on the market. Members can stop the value of its token from sinking by locking up tokens. Additionally, it prevents team members from selling their tokens as soon as trade begins, safeguarding holders’ interests.

Projects avoid dumpers from wrecking the price as soon as the token is listed on any market by locking up tokens. Their anti-dump program often includes efforts to increase investor interest by building their confidence in the project’s long-term viability.

Importance of token lockup for investors

Holders of tokens are shielded from sharp price swings because early investors must hold onto their holdings for a specified amount of time before selling them. If there isn’t yet a prototype, token lockup gives time for a product to be created and released. During this time, investors can assess the project’s development and choose whether they want to keep their tokens or exchange them for Bitcoin or Ether.

Why do you need vesting security?

The security of locked tokens is important because vesting requires locking a significant number of tokens worth hundreds of thousands or perhaps millions. The blockchain ecosystem lacks investor security and is still in an early phase. For different allocations, there are two ways to lock and vest tokens under stipulated token vesting contracts. In the first method, the tokens are kept in the founders’ possession and details the token issuance timetable. While in the second method, the founders use third-party token vesting platforms to create a token vesting timeline.

How to secure token vesting?

The blockchain infrastructure lacks investor security and is still in its developing phase. For different allocations, there are two ways to lock and vest tokens:

Manual vs automated token vesting, which one to prefer?

There are two approaches to implementing token vesting- automatically or manually. Manual token vesting may seem like a sensible financial move, but it has many problems. If well considered, using a vesting resolution has more advantages than manually regulating it. Here are four issues that manual token lockup typically faces:

Do you need a vesting tool for token vesting?

Given the drawbacks and dangers of human vesting, vesting automation is a preferable and more typical choice. A smart token vesting contract that was created and coded to enable the periodic release of some tokens to a list of qualified wallet addresses is known as a vesting solution. If you’re wondering why most DAOs and DeFi projects use automated vesting, it’s because it offers a few benefits over manual vesting to create and use effective token vesting contracts. The following are the justifications for using a vesting product:

Numerous third-party services exist that assist in designing a vesting plan for tokens deployed across numerous blockchains. While some of them offer a user interface, others employ an internal token release timetable. A vesting tool helps project managers automate the Token vesting contract/process. 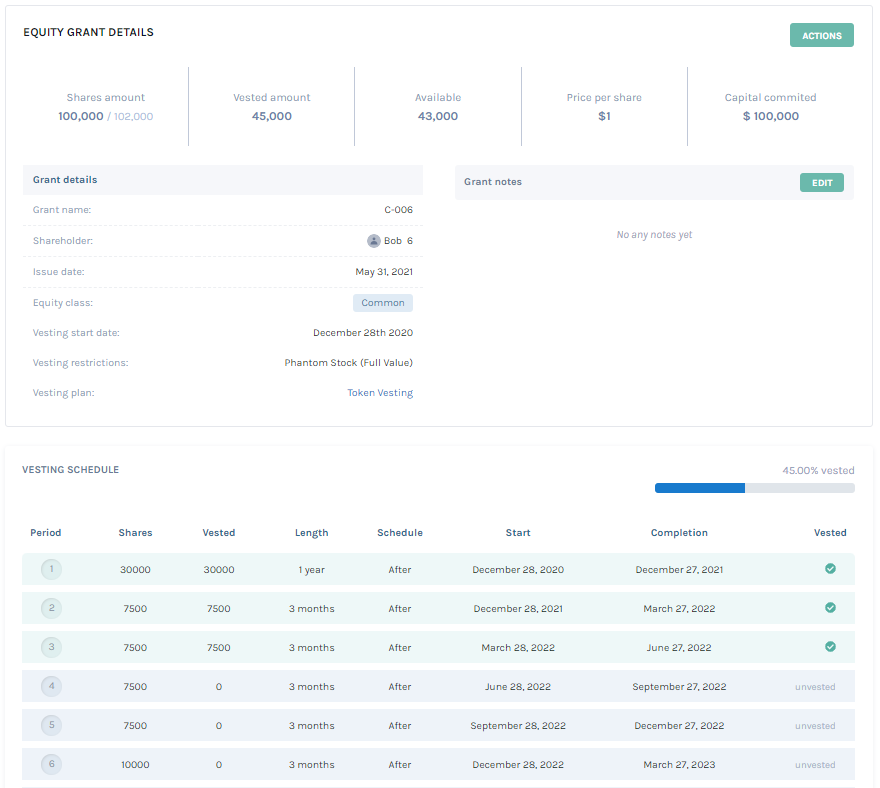 A token vesting tool will allow crypto projects to automatically lock their tokens and set a release schedule. As a result, it reduces the owners’ workload and saves time and money in the process.

Create and manage your equity vesting schedules on Eqvista

One of the simplest platforms to use for building a sophisticated and intricate cap table is Eqvista. This means that even while your organization prepares to issue shares to a shareholder, you can still construct a time-based vesting scheme. Not sure where to start? Contact us and let us help you.