In this article, we shall walk through SAFTs, Rules & Regulations, Its Pros & Cons etc.

A person often needs startup money when they have a concept for a new business. Financing for a new entrepreneurial activity involves fundraising from someplace unless they already have a significant amount of their own money. A Simple Agreement for Future Tokens (SAFT) can be used to finance the operations of cryptocurrency-related firms aiming to create a token. Initial coin offerings (ICO) are a substitute for this kind of funding. Targeting accredited investors, simple agreement for future token (SAFT) is one method of financing (those with a high net worth). Instead of issuing new tokens immediately, as would happen in an ICO, a SAFT guarantees investors tokens in the future once the project begins. In this article, we shall walk through SAFTs, Rules & Regulations, Its Pros & Cons, as well as their differences from ICOs (Initial Coin Offering) & Simple Agreement for Future Equity (SAFE) & various other know-hows.

It is a legally binding investment contract that calls for the approved investors’ consent to fund the cryptocurrency developers’ projects in return for discounted crypto tokens later. The contract, SAFT, is regarded as a security and is subject to American securities laws.

What is a simple agreement for future tokens (SAFT)?

A simple agreement for future tokens (SAFT) is a security issued to investors in exchange for the ultimate transmission of digital tokens from cryptocurrency developers. SAFTs were developed to assist cryptocurrency ventures in raising funds without violating regulations. A SAFT is similar to a simple token warrant agreement for future equity (SAFE), allowing early-stage investors to convert their cash investment into equity later.

SAFTs do not necessarily require to be listed as a debt on the balance sheet. Imagine, though, that the business fails before the money is converted to tokens. In that situation, it ordinarily makes the investor an offer to receive a payment equal to the capital invested before it pays its shareholders.

How does a simple agreement for future tokens work?

When a blockchain startup agrees to introduce a blockchain-based project involving a token in exchange for funding, the startup agrees to provide new tokens to investors after the company launches. Investors must pay in cash (local fiat currency), and the company must pay in tokens later. Because SAFTs are investments in blockchain-based companies, the token warrant agreement itself should be hosted on the blockchain. Although smart contracts are the preferred method of enforcing SAFTs, they can also be drafted and signed in other ways.

SAFT agreements reward qualified investors for providing early funding. Similar to convertible notes, the cryptocurrency corporation will issue tokens at a discount to their market value or worth in the event of a liquidation. The discount price is the value of a single token multiplied by the discount rate at the time of a triggering event. In essence, a SAFT enables the business to postpone the token’s worth. A valuation cap might be present in some SAFT agreements. Consequently, when parties raise money through a SAFT with a valuation cap, they essentially conduct a valuation negotiation.

Why is SAFT considered a security?

The act of investing with the expectation of a future return is the essence of financial security. When authorized or accredited investors invest in a crypto project, they do so with the expectation that once the tokens are legitimized and released, they will sell for a higher price, and the investor will profit handsomely.

The simple agreement for future tokens is used to complete the investment. The SAFT is classified as a security and is subject to federal securities regulations because it meets the basic requirements of any security.

Who can invest in a simple agreement for future tokens (SAFTs)

Only accredited investors, which include businesses like banks, investment broker-dealers, insurance companies, pension or retirement plans, trusts, limited liability companies, and individuals with specific FINRA licenses or who have earned more than $200,000 per year ($300,000 if married) for at least the previous two years or have a net worth of more than $1 million, are permitted to purchase SAFTs. These investors are occasionally allowed to take part in risky projects on the theory that they will be better equipped to handle the situation if their investment doesn’t pan out.

Who are authorized and accredited investors in SAFT?

Pros and cons of SAFTs

Since the cryptocurrency markets are always evolving, all advancements must be used or undertaken after weighing their benefits and drawbacks. Let’s understand what one should expect and beware of when it comes to SAFTs. 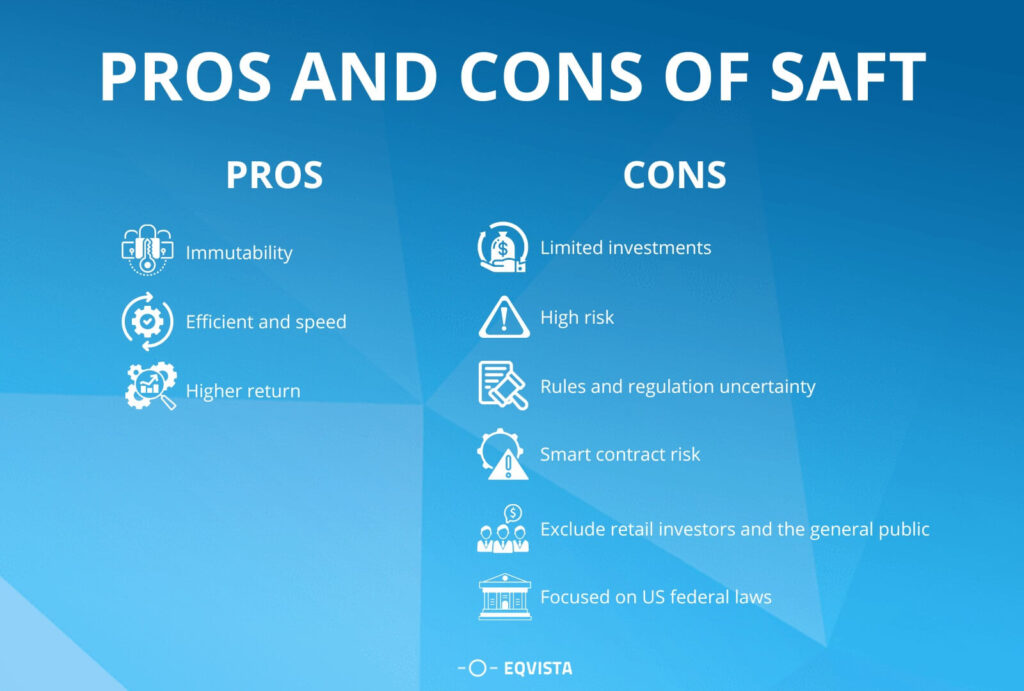 Here are some of the advantages of investing in a simple agreement for future tokens:

While these were the advantages, there are some disadvantages as well, which one should be aware of and consider while making selections. The following are the drawbacks of buying a SAFT.

What is included in a simple agreement for future token (SAFT)?

Before signing a SAFT, it is critical to negotiate three terms: triggering events, pricing caps, discounts, and pro-rata rights. SAFTs aren’t created equal, implying that the terms can make or break an investment.

It can be simple for cryptocurrency developers to break the law because they aren’t likely to be knowledgeable about securities law and may not have access to financial and legal guidance. The creation of a simple agreement for future tokens provides a straightforward, low-cost structure that startups may use to seek money while keeping compliant with the law.

When a business sells a SAFT to a customer, it takes money from that customer without offering, selling, or exchanging any coins or tokens. Instead, the investor is given paperwork stating that, in the event that a cryptocurrency or other product is established, they would be granted access.

How do SAFT, SAFE, and ICO differ from each other?

SAFT investment contract grants investors future equity instead of future tokens upon the occurrence of a qualifying event, such as a merger, acquisition, or fundraising round. The San Francisco-based startup accelerator Y-Combinator developed SAFE notes, which are seen as a more founder-friendly alternative to convertible notes.

Whereas the use of SAFTs in conjunction with ICOs is common (ICOs). During the launch, a project sells its tokens to regular, pre-approved customers. On the other hand, a simple agreement for future tokens only works with accredited investors. Those who can lawfully transact in securities are considered accredited investors. Additionally, they satisfy certain requirements for income, net worth, and professional experience. SAFTs can be categorized as security that complies with the essential requirements of US federal regulations due to investor class distinctions.

Get crypto asset valuation from the highly skilled team of Eqvista!

If you require legal support with the funding process for a Web3 company, Eqvista can help. With Eqvista’s professional business valuation, a method for determining a firm’s economic value, we can help you determine how much your company is worth. You may assess the value of your company, assets, revenue, and other factors with the use of a business valuation. You can get assistance from Eqvista’s highly skilled valuation team in determining the worth of your tokens as well as the fair terms for token side letters and warrants. Getting value is now a crucial part of growing your business. To find out more about our valuation services, get in touch with us.