A distribution waterfall can be visualized as a money waterfall with numerous buckets.

Waterfalls, clawbacks, and catch-ups are terms used in private investing to describe how distributions flow from the investment to the partners, what happens if things go wrong, and how the manager’s performance fee is structured. Every investment has a specified waterfall, and it’s crucial to understand how it works because an unfavorable waterfall can tip risk in the investor’s favor. Assets take time to sell, with an investment time horizon of 10 years or more.

A general ‘waterfall’ visualizes the sequential breakdown of a starting value (ex: revenue) to a final result (ex: profit) by depicting intermediate values and ‘leakage’ points. Companies can use this to track data at each step. Private equity is a type of alternative investment that involves money that isn’t traded on a public exchange. Private equity funds and investors invest directly in private enterprises or engage in buyouts of publicly traded companies, culminating in the delisting of public stock. Institutional and individual investors fund private equity, and the funds can be used to support innovative technology, make acquisitions, grow working capital, and boost and stabilize a balance sheet.

The technique by which capital is allocated to a fund’s numerous investors as underlying investments are sold for gains is referred to as a distribution waterfall. The total capital gains produced are dispersed according to a cascading system made up of successive layers, which is why the term “waterfall” is used. When one tier’s allocation requirements are met, the extra funds are subjected to the following tier’s allocation rules, and so on.

How does waterfall analysis work to distribute private equity?

A distribution waterfall can be visualized as a money waterfall with numerous buckets. The allocation techniques for the various buckets vary. It is typically used to distribute proceeds from realized investments and cash inflows among the fund’s private equity fund sponsors and investors. The term “distribution waterfall” also describes how a fund’s investors are paid as underlying investments are sold. It may stipulate that an investor receives his or her initial investment plus a preferred return before the general partner’s share in the earnings. This type of setup can boost investor confidence in the equity fund and its profit potential.

Why do businesses need to build a waterfall structure?

Few of the important terms to be aware of to understand completely the waterfall analysis which is as follows: 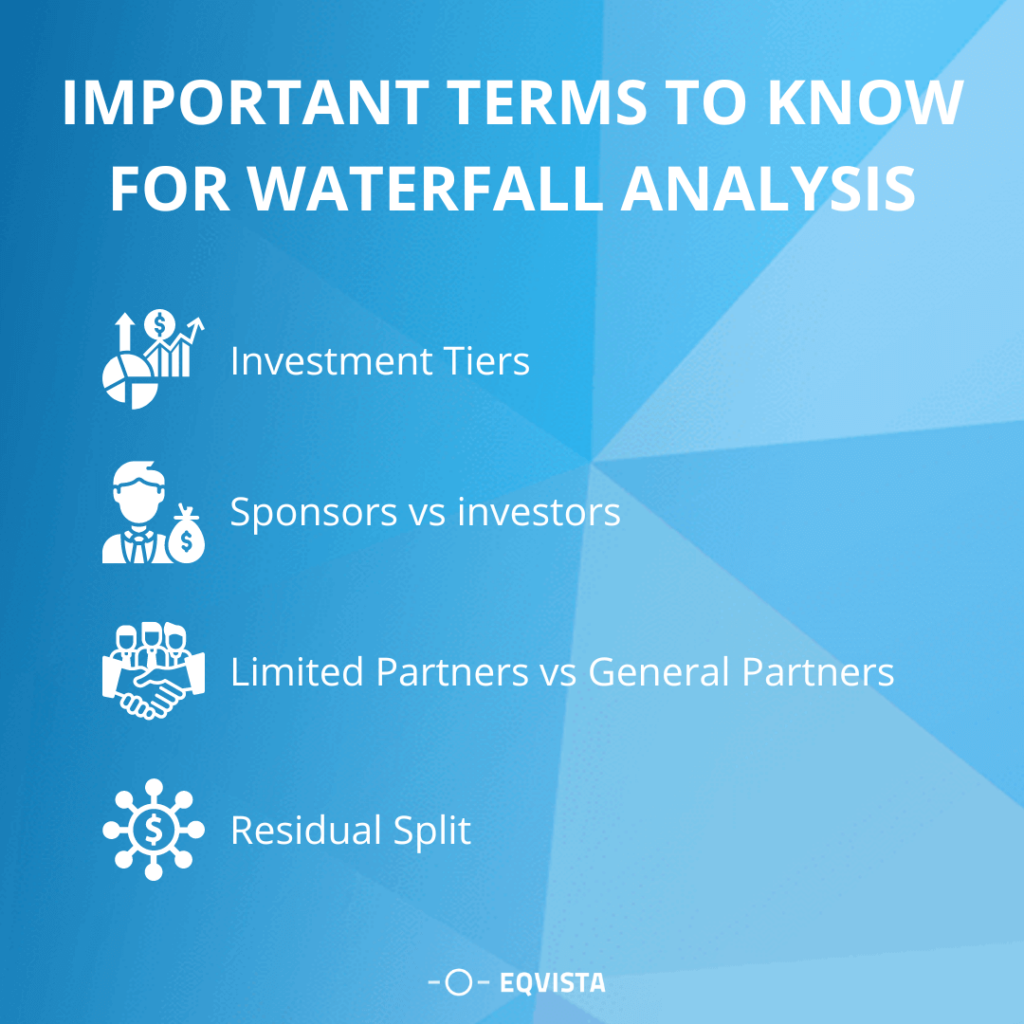 How does waterfall calculation work in private equity distribution?

Carried interest is a type of incentive compensation that is used to attract and retain talented investment managers and is generally treated as a share of the fund’s profits. This is also known as the “carry” “performance share”, “allocation”, “promote”, “promoted interest”, or “override”, in which all terms can be used interchangeably.

In terms of taxation to the General Partner, they are generally treated as capital gains (although there are suggestions in the United States to change this). The market standard for the carried interest size depends on the type of funding, such as:

To formulate preferred returns, it is usually a compounding of a fixed interest rate computed annually (market standard), semi-annually or quarterly. Typically, the percentages vary from 5% to 12%, with 8% as the current standard.

Assume a general partner invests 5% of the required equity for a real estate project and raises the rest 95% with a 6.00 percent preferred return, both utilizing an IRR computation. Following the preferred return, the top tier distributes the cash flows so that the GP gets 20% and the LP gets 80%, but only until the LP gets an IRR of 8%.

Any money left over after the 8% will go towards the residual split (not to be confused with residual value or exit events). Any money left over after you’ve exhausted all of the lesser investing tiers is referred to as residual. It’s basically the last tier with no hurdle cap. The term “residual” is often used but is not included in most agreements. The extra cash flow will be shared 50/50 in our private equity waterfall example, with the GP and LP getting equal amounts.

How does European and American waterfall analysis work in private equity?

The American waterfall encourages a deal-by-deal return schedule because it permits managers to be compensated before investors receive their entire investment and preferred return. The distribution proceeds are allocated at a “whole fund” level in the European waterfall, and each payout reflects the overall performance rather than being related to a specific investment.

The carried interest is calculated on a net cumulative basis and is only distributed to the manager after all contributed capital, and the preferred return have been returned to the investors. The first distributions in a European waterfall often refund all of the donated capital. The distribution proceeds are often allocated on a deal-by-deal basis under an American waterfall.

As a result, each investment’s performance is related to it. In the early years, this strategy is more advantageous to the GP since it distributes carried interest more quickly by making the carry payable with regard to each investment that brings the fund to a net-cumulative-profits-to-date position. If the first deal’s internal rate of return (IRR) is higher than the preferred return in this form of deal-by-deal cascade, the first deal may return some carried interest.

Distribute your private equity with waterfall analysis with Eqvista software

The waterfall analysis is a method that investors and shareholders can use to develop financial models of how much each shareholder will get when the firm is sold. Users can view possible exit situations using these cap table models, which go through sophisticated calculations. If you are someone who is looking for help in the distribution of your private equity with the waterfall analysis, we have got you covered with our software which helps in this process. To know more about the software. Fill up the sign up form and get started with us.

More about Waterfall Analysis – Everything you need to know

How do Liquidation Waterfalls Work? Importance of Waterfall Analysis for VC Investment