How do venture capital fund metrics help in the funding process?

The specifics of key VC fund metrics can be difficult to recall, especially when there are so many of them.

Venture capital (VC) has been a critical source of funding for innovative businesses. To determine the worthiness of a particular deal, venture capital firms employ a variety of financial metrics and figures. These include current revenue, revenue growth rate, revenue type, burn rate/runway, free cash flow, product margins, cost of sales, and a slew of others. There are numerous valid reasons why venture capitalists are conservative with their investment funds.

Venture capital is a type of private equity financing provided by venture capital firms or funds to startups, early-stage, and emerging companies with high growth potential or that have demonstrated high growth. The process of determining value and investability in mature companies is relatively simple. Established businesses generate sales, profits, and cash flow that can be used to calculate a reasonably reliable measure of value. However, VCs must put in much more effort to understand the business and the opportunity for early-stage ventures.

Many businesses use venture capital (VC) as a type of private equity financing to scale and grow. It necessitates that investors take educated risks and make calculations on companies with high growth potential. Because of the risk involved, learning how to do important calculations to determine the state of your VC fund is required if you want to delve deeper into the world of VC.

How does VCs investment strategy work?

Venture capitalists (VCs) are well-known for placing large bets in new start-up companies in the hopes of hitting a home run on a future billion-dollar company. With so many investment opportunities and start-up pitches to choose from, venture capitalists (VCs) often have a set of criteria that they look for and evaluate before investing. The management team influences a VC’s decision, business concept and plan, market opportunity, and risk judgment.

Why is it important to report fund performance?

Measuring business performance is critical because it helps you identify improvement areas and improve business operations over time. Successful investors understand the importance of measuring venture capital fund performance in order to get the most out of their investment. Fortunately, there are numerous VC fund performance metrics available to assist you in measuring your success.

How to calculate fund performance with venture capital fund metrics?

Every day, venture capitalists assess the performance of startups. Many of the metrics used to evaluate companies are fairly well understood and publicly available. VC performance at a high level is typically measured using three metrics: TVPI, DPI, and IRR.

Understand the difference between IRR and multiple calculations

Because they are typically reported to investors side by side, it is easy to confuse the internal rate of return (IRR) with the equity multiple. Because one calculation provides information that the other does not, equity multiple and IRR are shown together.

The IRR calculation, for example, takes into account the time value of money (TVM), whereas the multiple equity calculations do not. However, the equity multiple reports an investment total cash return, whereas the internal rate of return does not.

There are so many formulations of the fund metrics; they function differently and are highly essential for determining the venture capital and its aspects. The multiple calculations include: ‌ 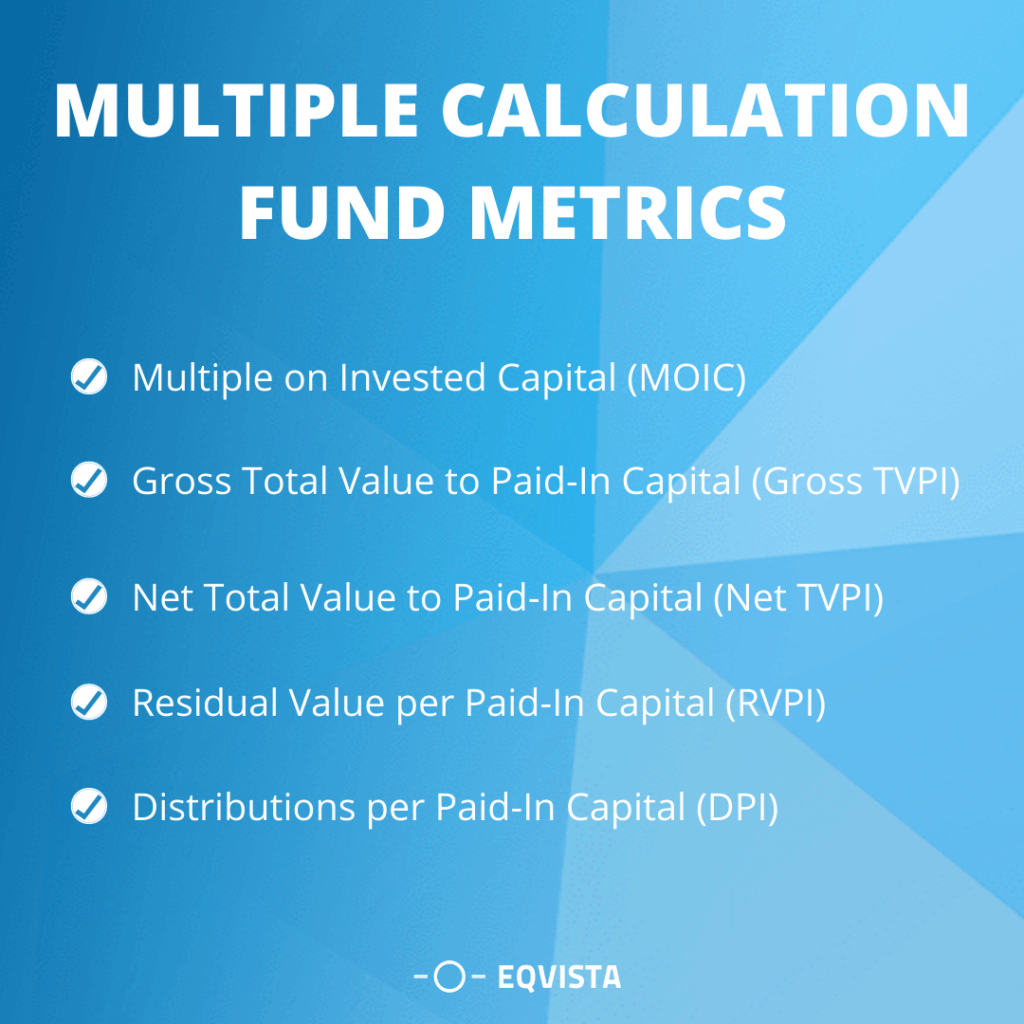 There are a few methods in which the internal rate of return is calculated, which is explained below:

How to choose the right fund metrics?

The complex world of venture capital is not always easy to understand or enter. The specifics of key VC fund metrics can be difficult to recall, especially when there are so many of them. This is where the cheat sheet comes in. These nine venture capital fund metrics, as well as the formulas for multiple and IRR calculations, are excellent places to begin learning how to assess the potential and health of your funds.

Get high-quality valuation reports for VC funding like with Eqvista!

Many corporations have established investment arms in the last decade to try to capitalize on the potential of entrepreneurial activity, and they can learn from the VC industry’s practices. The management team and deal sourcing play a critical role in determining investment success should influence who they fund—and where and when. Are you feeling stuck when it comes to getting high-quality valuation reports? Don’t worry, Eqvista is there to help you. Our expert team helps the clients to get the desired reports according to the market scenario. Just fill up the sign up form and get started.