Series C funding is the fourth stage of capital raising by a startup.

Each series of startup fundraising pertains to different stages of business as the company matures. When a startup raises money, it goes through several stages before reaching its final funding round, known as a “series C round” or “series C funding”. This is the final level of venture capital financing for a firm and the fourth stage of startup funding. On the other hand, some firms prefer to go through additional rounds, such as series D, E, and so on.

Series C is a funding round that is more strategic and operational in nature where capital raised is used for research and development, feasibility study of the product and services. Let’s have an elaborated view of what and how it contributes to the business.

Series C funding is the fourth stage of capital raising by a startup. Companies that go to this round of investments already have proof of their success and a high valuation. At the time, the businesses were “young mature” whose owners had already convinced venture capital firms or other institutional investors. Founders are considered to have a viable business, and the investors are generally encouraged about its long-term odds of success.

While previous rounds of funding use investment money to start making money and carve out their space in the market, it is assumed that Series C funding funnels large amounts of cash into profitable businesses to scale them up and get a quick return for the investors. Series C funding aims to prepare a company to be acquired, go public on the stock market, or undergo significant expansion.

How does Series C funding work? 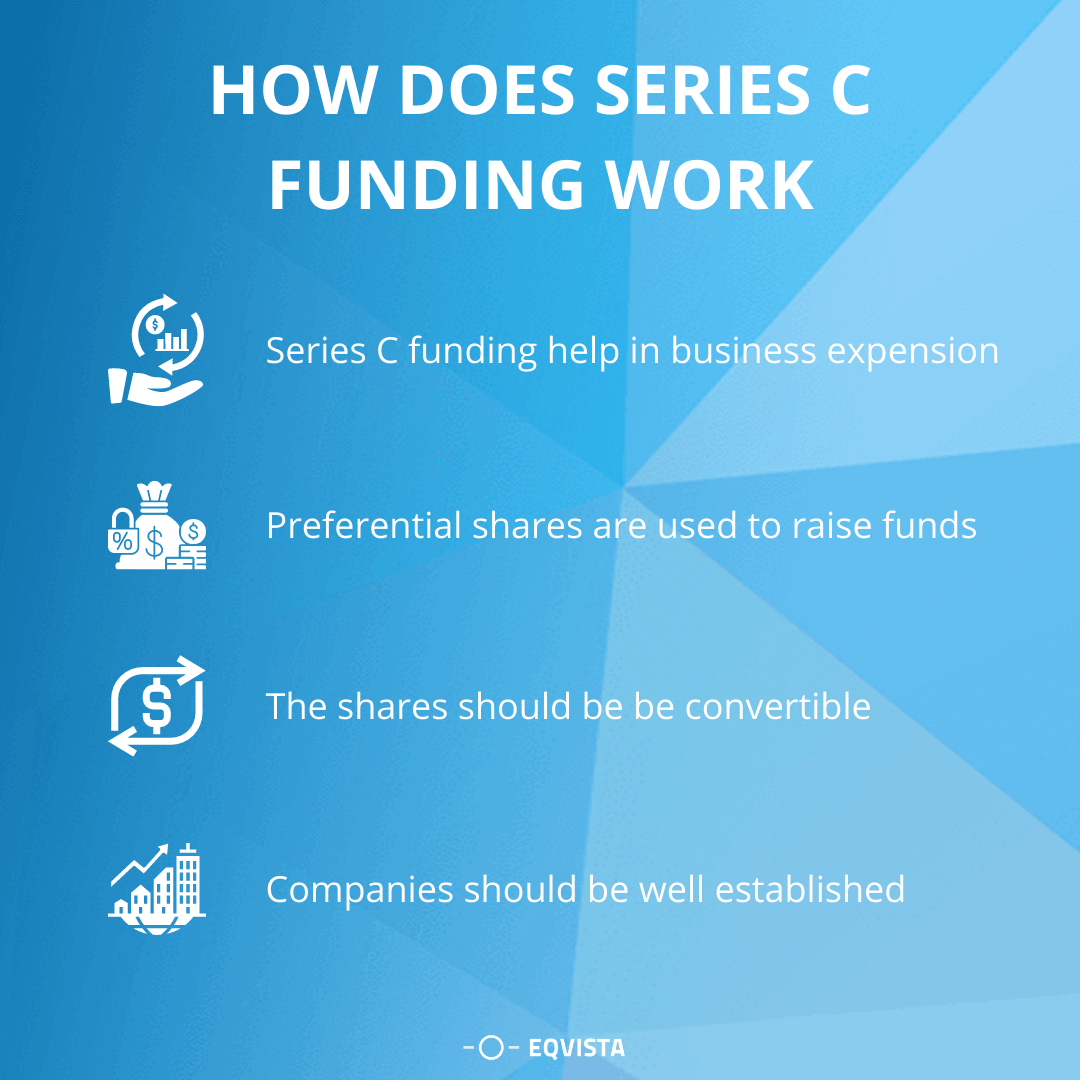 Preferential shares are used to raise funds in Series C funding, just as they were in the prior funding rounds. The shares are meant to be convertible. Holders will be able to convert them into shares in the company at a later date. To clarify, companies that are looking to raise money through a series C round are no longer startups. They are often well-established and profitable businesses in their last stages of development. A large customer base is drawn to their core products or services because of the high demand they generate.

Companies seek series C financing for further expansion to reinforce their existing success. Following a series C round, the company aims to scale its operations and grow. The proceeds from this financing round are most commonly used to enter new markets, research, development, or acquisitions of other companies.

There are several firms that offer Series C Funding, most notable ones are venture capital investors, private equity firms and investment banks. Investors might be looking for a few key things when startups reach this stage in their business. We explain more about them below:

Why is Series C Funding Important?

As evident from the discussion, series C funding is more strategic and operational where funds are raised to study a new market, develop a new product or service or analyze consumer behavior, a few more essential places for series C funding includes:

Because Series C companies are no longer considered startups, this round of capital is distinct from other funding rounds. As a result, the startup continues to grow at an accelerating pace. However, it is not uncommon for companies in their third round of funding to focus on expanding their workforce in order to keep up with demand.

For instance, a startup may need to expand its HR department, or the startup may find that the business requires new hires as the demand for new product development.

Startups that have reached this funding round are doing incredibly well and are ready to expand to new markets, develop new products, or acquire other businesses. Startups at this stage may also be interested in reaching international markets and increasing their valuation before an acquisition or Initial Public Offering.

Companies at the Series C funding stage of their business are thinking a lot more strategically and about their long-term goals.

How to raise series C funding?

Series C capital is used to prepare a firm for sale, IPO, or significant expansion. It is usually the final step of a startup’s fundraising, though some companies do further rounds. The founding and the core team of the startup venture must consider the legal compliance and must also adhere to sovereign government rules and regulations in the jurisdiction the startup is based on to raise funding. Follow these steps to raise Series C funding for your startup. 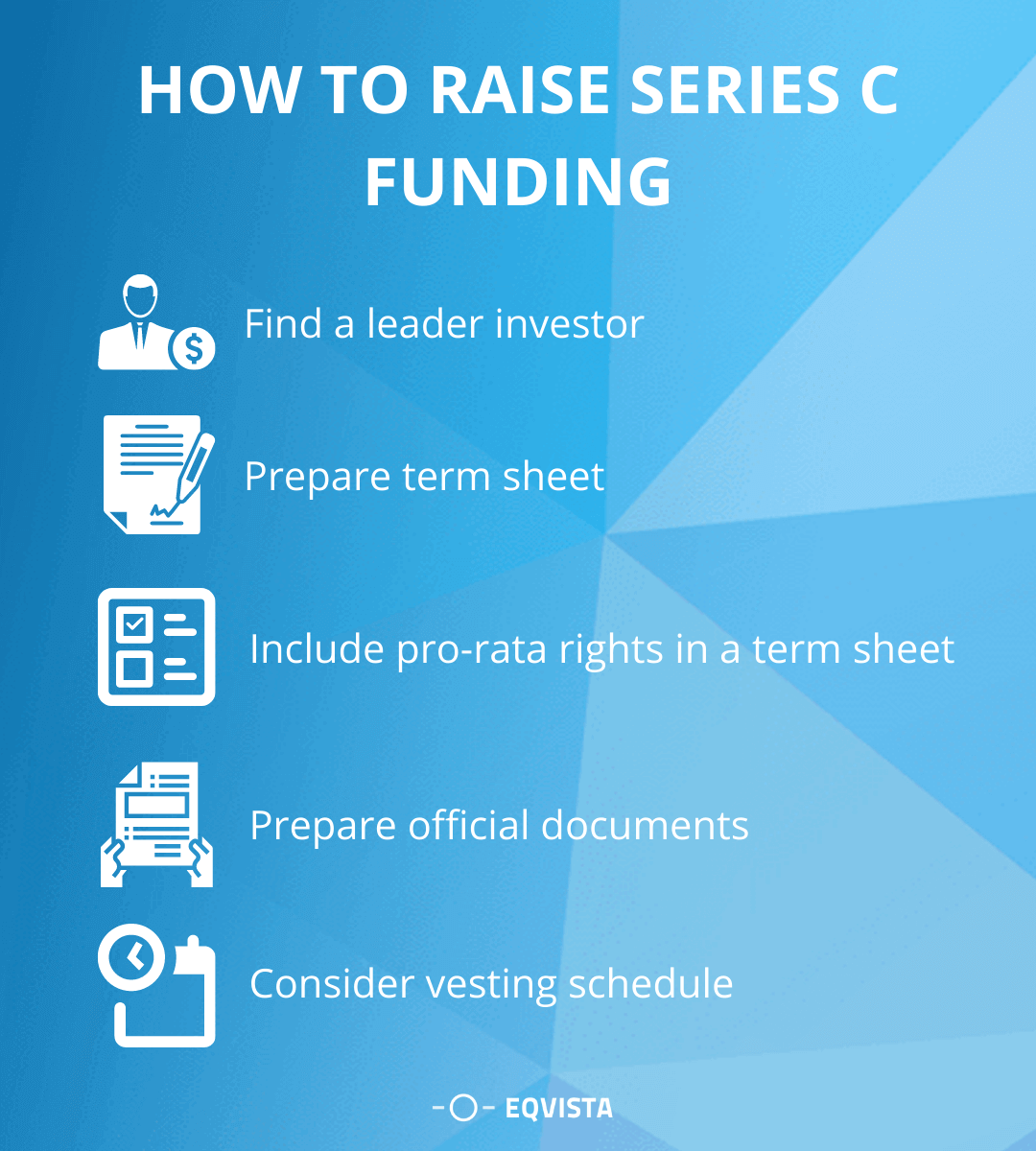 Finding out who is investing in your industry’s start-ups will give you a better idea of the kinds of contacts you should be making. Analyze which startup investors are most active and what types of ideas they are funding. While some venture capitalists are open to working with any firm that comes their way, others prefer to focus their efforts on a certain industry and use their connections there to their advantage. The following are some of the most prominent Series C investors:

A term sheet can be understood as a contract between the startup founder and the investor. The only noticeable difference is that it is usually non-binding. This contract later serves as the legal document to which both parties have fully agreed to a final investment.

Additionally, a term sheet can be understood as a financial model and the guidelines laid down to protect and act in each party’s best interest involved in the transaction.

3. Include pro-rata rights in a term sheet

Pro-rata right is a legal term that describes the right, but not the obligation, that can authorize an investor to maintain their initial level of percentage ownership in a company during subsequent financing rounds.

The idea of a pro-rata right is the concept of dilution. Each new round of equity financing implies the issuance of new shares. In simple words, the current shareholders lose part of their voting power as calculated on a percentage basis.

For a funding deal to materialize, each party signs a contract or a mandate that acts as an official document in case of any breach of contract terms.

Usually, preparing official and legal documents is the work of advocates and the accounting or some expert in the matter but knowing hooks and crooks are always beneficial for the founders. Also, the professionals processing such official documents must be trustworthy. Basic knowledge of official documents eliminates the risk of being cheated.

Full rights cannot be revoked by another person, which is why vesting is so important. To begin with, each founding member of the company receives an equal share of the company’s stock under the terms of the founders’ equity. For the founders, it encourages them to take further risks.

When a company needs Series-C capital, it means it is well-established, profitable, and has a sizable market share. The company’s life cycle is illustrated graphically that, in general, business declines after a high point is reached. An acquisition or expansion of a product or service is required to re-enter the expansion stage.

At this point, ‘Magic Leap’ had raised more than $1 billion. Uniphore Pvt. Ltd. got roughly 4 million dollars in Series-C fundraising in July 2019 from March Capital Partners in India. This means that even small businesses can access Series C money because there are no strict guidelines for using it or how much it should be.

How much time does it take from series C funding to the IPO stage?

Putting it in the real-world, time from Series C funding to IPO is not definitive or pre-decided by any institution or government. Analyzing the startups that raised funds by IPO shows that it usually takes 4 to 9 years to reach the stage of IPO from Series C. Also, IPO lies in the table of government institutions after application for IPO by startups.

Need a business valuation to get funding for your company?

When a startup venture decides to raise series funding, term sheet, financial model, mandate, and pitch book become complex to understand and follow diligently. If the founding team does not have experience in finance and legal compliance, it becomes a challenge. Eqvista can help a business and a startup venture sign the mandate, raise the desired and adequate round of funding, and get a correct market valuation once the startup venture matures and decides to go public. To learn more about our business valuation services, contact us today and we will be happy to offer you a free consultation.

More about Difference between Series A, B, C – Fundraising Guide