How to calculate capital gain tax on shares in the US?

Investment in stocks can be a great way to build wealth and financial security, but you must be aware of the tax consequences of stock purchases. As a general rule, if you hold stock for more than a year, the profit you make from selling it is taxed at either 0%, 15%, or 20%, depending on how long you held the stock. Taxes are also usually levied on dividends from stocks.

Here is a quick guide to understanding capital gain tax allowance and ways to reduce stock taxes. Make sure to consult a tax expert before making any major decisions.

Capital Gain Tax in the US

U.S. federal income tax is imposed on the sum of all capital gains made by people and enterprises in the United States. The investor’s tax bracket determines the tax rate and the length of time the investor held the investment. To qualify for short-term capital gains, an investment must be held for less than a year before it can be sold. There is a lower tax rate for long-term capital gains on the sale of assets that have been held for at least one year.

What is capital gain?

Profits from the sale of a capital asset, such as stock, a business, an area of land, or a piece of art, are called capital gains. Most of the time, the tax rate on capital gains is much lower than on ordinary income.

Understand capital gain tax in the US

Increasing the capital gains tax rate is part of a scheme to raise revenue for social assistance programs that benefit low-income families and children by taxing the wealthiest individuals and businesses.

Why is it important to invest in US stock?

As a wide range of stocks is traded in different parts of the world, investing in U.S. stocks provides investors with a wide range of potential returns. Long-term capital gains can be substantial when placed in globally appealing and scalable companies. For those who’ve been keeping up with the tech world’s biggest players for the past decade, you’ve probably heard of FAANG (Facebook, Apple, Amazon, Netflix, and Google). The current value of a $10,000 investment in the FAANG portfolio would be $206,506, with a return of approximately 1965% over the past eight years. There were only a very few people who expected these companies to grow at such a rapid pace. If you’re a serious investor, it is important to diversify investments in US stocks as well.

Importance of capital gain tax in US economy

The capital gain tax rate for shares in the US raises revenue for the government, but it also discourages investment (by reducing the final rate of return). Changes in the tax rate are accompanied by forecasts of how the change will affect both outcomes of the proposal. Increasing the tax rate would make it more difficult for people to invest in assets, but it would raise more money for the government at the same time.

The fact that the United States competes with other countries for capital is another economic effect that could cause actual receipts to differ from those predicted. Changes in the capital gains tax rate could encourage more foreign investment and boost the US economy.

How does the capital gain tax work?

When a capital asset is sold or exchanged for a higher price than its basis, a capital gain is generated for the seller. The purchase price of an asset, plus commissions and improvement costs, minus depreciation, is known as the basis. When an asset is sold for less than the basis, a loss in the capital is incurred. There is no inflation adjustment for gains and losses (or other types of capital income and expense).

Under the Budget Reconciliation Bill (which is currently under negotiations), capital gains taxes will rise to 31.8% if the proposed 25% rate is approved. This would be the highest federal long-term capital gains tax rate since the 1970s and third-highest in the Organization for Economic Co-operation and Development member nations (OECD).

Taxes on long-term capital gains are less than ordinary income, but how much you pay depends on your taxable income. Depending on your annual taxable income, you’ll pay either 0%, 15%, or 20% on the sale of most assets or investments that have been held for more than a year.

Calculation of capital gain tax for shares in the US

US stocks would generate a capital gain if they were sold at a higher price than the purchase price. As long as the investment is sold for a profit, there will be no tax consequences in the United States. The following are the terms and implications of tax calculation.

Things you need to know before calculating tax

Before calculating the US CGT rates, it is important to make sure the following conditions are met: 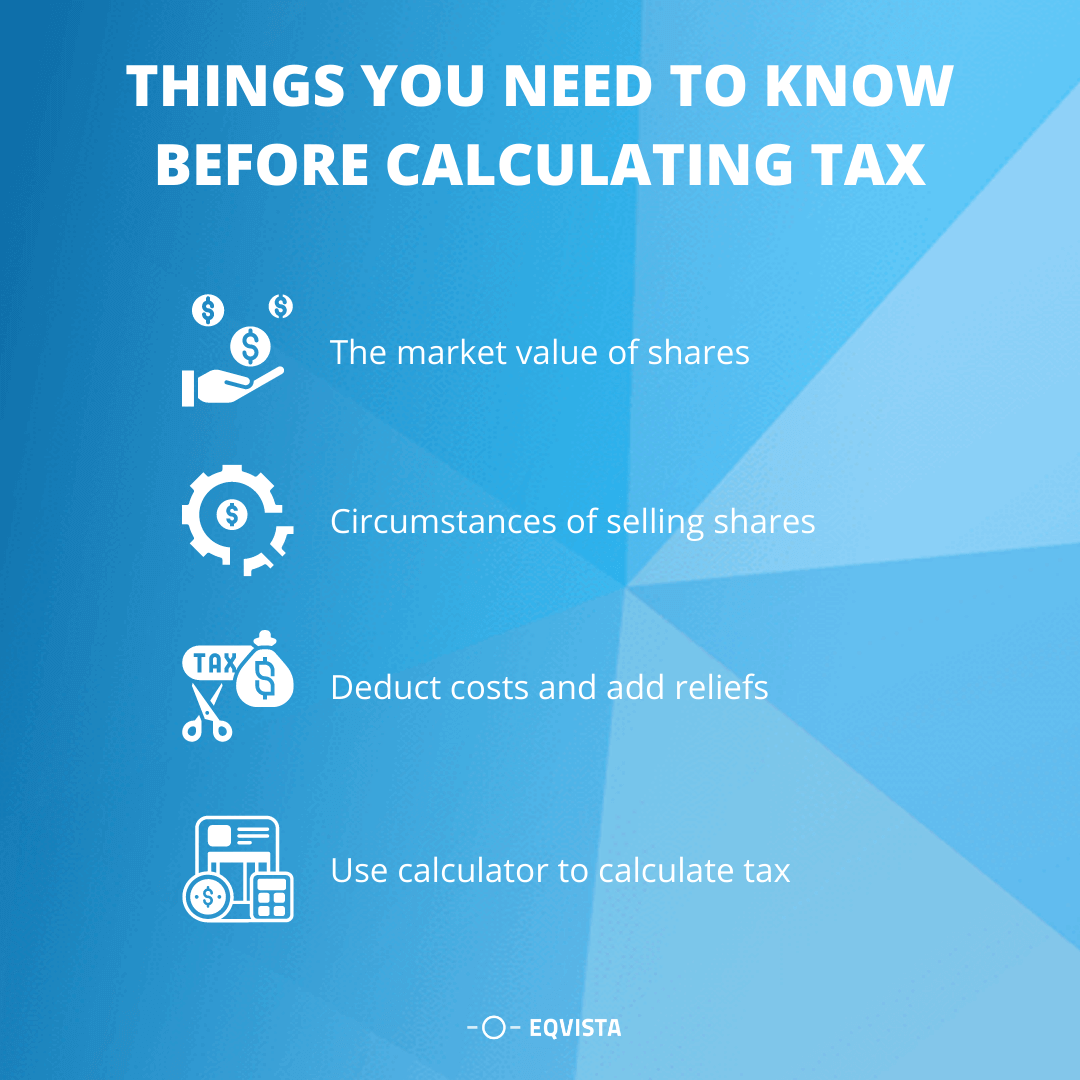 The market value of shares

You can use the current share price as a starting point when calculating your profit. If you are:

The price at which the shares were sold or given to you by someone who claimed Gift Hold-Over Relief should be used to calculate your profit. No matter how much you paid, put it to good use.

If you decide to sell your stock, there are a few specific rules to follow in order to determine the value of your investment:

You may be able to deduct some of the costs associated with buying or selling your stock from your profit. These are a few of the more notable ones:

Use calculator to calculate tax

The first step in determining whether or not you are required to pay capital gains tax is to know your profit. In order to use the Capital Gain Tax Rate Calculator, it is necessary that you have sold shares that were:

How to calculate Capital Gain Tax on shares

When an asset’s value rises above its purchase price, it’s known as capital appreciation—the value of an asset changes as a result of its performance in the marketplace. A capital gain on equity shares is earned if an investor is able to sell the asset at a higher price than he or she paid for it.

It is possible for investors to make money on the stock market in two different ways (depending on the length of time they keep their shares): short-term (less than 12 months) or long-term (more than 12 months) capital gains on shares.

How to minimize Capital gain tax?

Capital gains tax in the United States can be reduced in a variety of ways. The following is a list of things that you can do to reduce or avoid capital gains taxes:

It’s possible to reduce the tax you owe on future gains by using a loss from one investment as a basis. Two stocks that are worth 10% and 5% more or less than you paid for them are worth a total of 15% or 20% more or less than they were worth at the time of purchase. For example, if you were to sell both stocks, you would be able to deduct the loss from your capital gains tax bill. However, losses do occur and this is a way to profit from them. Obviously, in an ideal world, all of your investments would be appreciated.

Capital losses can be used to offset ordinary income up to $3,000 for the year if they are greater than capital gains. After that, you’ll be able to carry the loss forward to future tax years indefinitely.

It is possible for a taxpayer to designate that a sale of corporate stock represents a specific acquisition. So, a taxpayer with 500 shares may have purchased them in five separate transactions at various prices. Even in the era of physical stock certificates, there was no way to tell which stock had been purchased at which time. Selling 100 shares allows the taxpayer to realize one of five different types of gains or losses, depending on which of the five lots is sold. Maximize or minimize your gain depending on the overall strategy you use, such as making losses to offset your gains or keeping your total income within the range where you pay less or no tax at all. This can be done in many ways.

Taxpayers must identify which lot they intend to sell in order to take advantage of this strategy (creating a “contemporaneous record”). It’s a “versus purchase” deal, meaning it’s going up against a predetermined purchase. A “Lot Selector” on brokerage websites may allow a taxpayer to select the purchase to which a sell order is linked.

Assuming you’re in a lower tax bracket when you withdraw money from a traditional retirement account, your gains will be taxed as ordinary income. The money you withdraw from Roth IRA accounts, on the other hand, is tax-free if you follow the relevant rules.

Investors nearing retirement may want to hold off on selling their assets outside of these types of accounts until they are no longer required to work. In the event that their retirement income is low enough, they may be able to avoid paying capital gains tax entirely. However, if they’re already in the “no-pay” tax brackets, there’s an important consideration: If the capital gain is large enough, it could raise their total taxable income to the point where they’d have to pay taxes on their gains.

If you’re trying to sell a security, you purchased over a year ago, be sure to get the purchase date. If the value of your investment remains stable over the course of a few days or weeks, you may want to consider delaying your sale until you are eligible for the long-term capital gains treatment.

It is important to know your cost basis if you have purchased shares of the same company or mutual fund at different times and prices. It is common for investors to use FIFO, but four other methods can be used to calculate cost basis: last-in-first-out (LIFO), dollar-value, the average cost (for mutual fund shares), and specific share identification.

If you are planning to sell a large amount of stock, you should consult with a tax professional to see which method is most advantageous.

The lowest capital gains tax rate is available to investors who find and hold onto great companies for the long term. This, of course, is more difficult than it appears. A company’s fortunes can change over time, and there are many reasons why you may want or need to sell earlier than you originally planned.

Get expert advice on how to manage your shares from Eqvista

Finally, we recommend that you seek the professional advice of Eqvista before making any investments to determine whether or not it is appropriate for your specific financial situation. Our U.S. tax advisor can provide additional information on the tax implications in the United States. Take experts to help to manage share and equity with Eqvista!