Getting the Value of Goodwill – Intangible Asset Valuation

When a firm looking to buy another company is willing to pay a price premium over the fair market worth of the company’s net assets, the idea of goodwill comes into play.

The intangible asset known as goodwill is produced when one firm buys another. The purchasing price of a corporation frequently surpasses its book value. The gap between a company’s purchase price and its book value is known as goodwill. It’s crucial to account for goodwill in order to maintain the parent company’s accounts in order. Goodwill is an intangible asset in accounting. When a firm looking to buy another company is willing to pay a price premium over the fair market worth of the company’s net assets, the idea of goodwill comes into play.

Before deducting the wages of the owners, goodwill is appraised by multiplying the amount for maintainable profits by a multiplier ranging from one to five. The multiplier employed is subjective, and it is determined by criteria such as recent business growth and profitability.

What is goodwill in a company?

Goodwill is an intangible asset associated with the purchase of a company by another company. Goodwill is defined as the fraction of the acquisition price that is greater than the whole of the net fair value of all assets bought and liabilities taken in the transaction. Goodwill exists for a variety of reasons, including the value of a company’s brand name, a strong client base, good customer relations, good employee relations, and proprietary technologies.

How does goodwill affect some business activities?

What does goodwill impairment mean?

When the carrying value of goodwill on financial statements exceeds its fair value, corporations declare a goodwill impairment charge. Goodwill is documented in accounting after a corporation buys assets and liabilities for a price that is higher than their identifiable net value.

Example of goodwill in business

To put it another way, if a firm named ABC has 10 crores in assets minus liabilities and another company buys it for 15 crores, the premium value after the acquisition is 5 crores. This sum of 5 crores will be recorded as goodwill on the acquirer’s balance sheet.

In comparison to a newly created business, a well-established firm gains a strong reputation in the market, builds client trust, and has more commercial connections. Goodwill is the monetary value of an advantage that a buyer is willing to pay for. When a buyer pays for Goodwill, he expects to make a lot of money in comparison to the profits made by other companies. As a result, goodwill exists only in the situation of companies that make exceptional profits, not in the case of companies that make typical earnings or losses.

Goodwill is the value of a company’s reputation earned through time in terms of predicted future profits over and above typical profits. Goodwill is a real intangible asset that cannot be seen or felt but may be bought and sold in reality. The importance of goodwill value in a partnership cannot be overstated.

When does a business need to value its goodwill?

Goodwill is computed by deducting the difference between the liabilities and the fair market value of the assets from the company’s purchase price. Companies must examine the value of goodwill at least once a year on their financial statements and reflect any impairments. 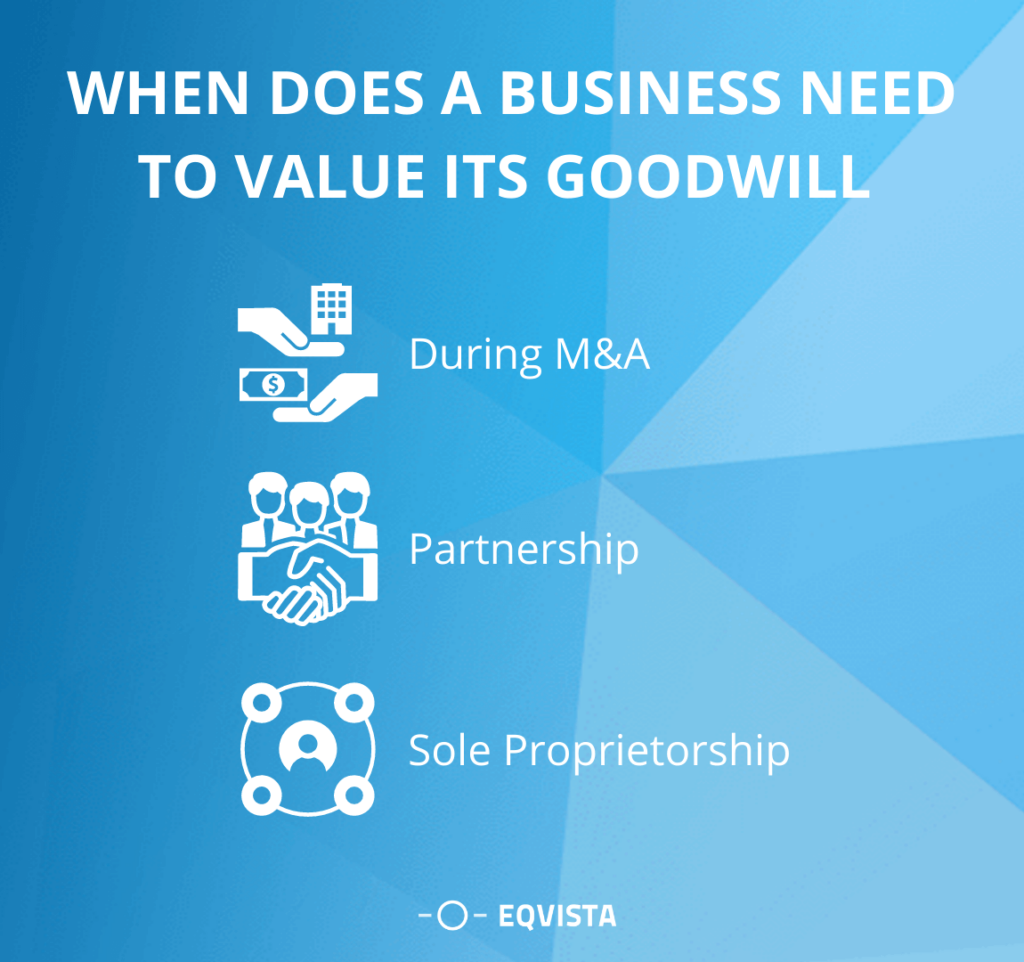 How to calculate the value of goodwill?

It is an intangible asset that symbolizes a company’s non-physical assets. It is extremely valuable, yet identifying and valuing it is difficult. Here is the explanation of the goodwill valuation methods, which are extremely effective :

There are a few factors that affect the goodwill valuation, which are explained below: 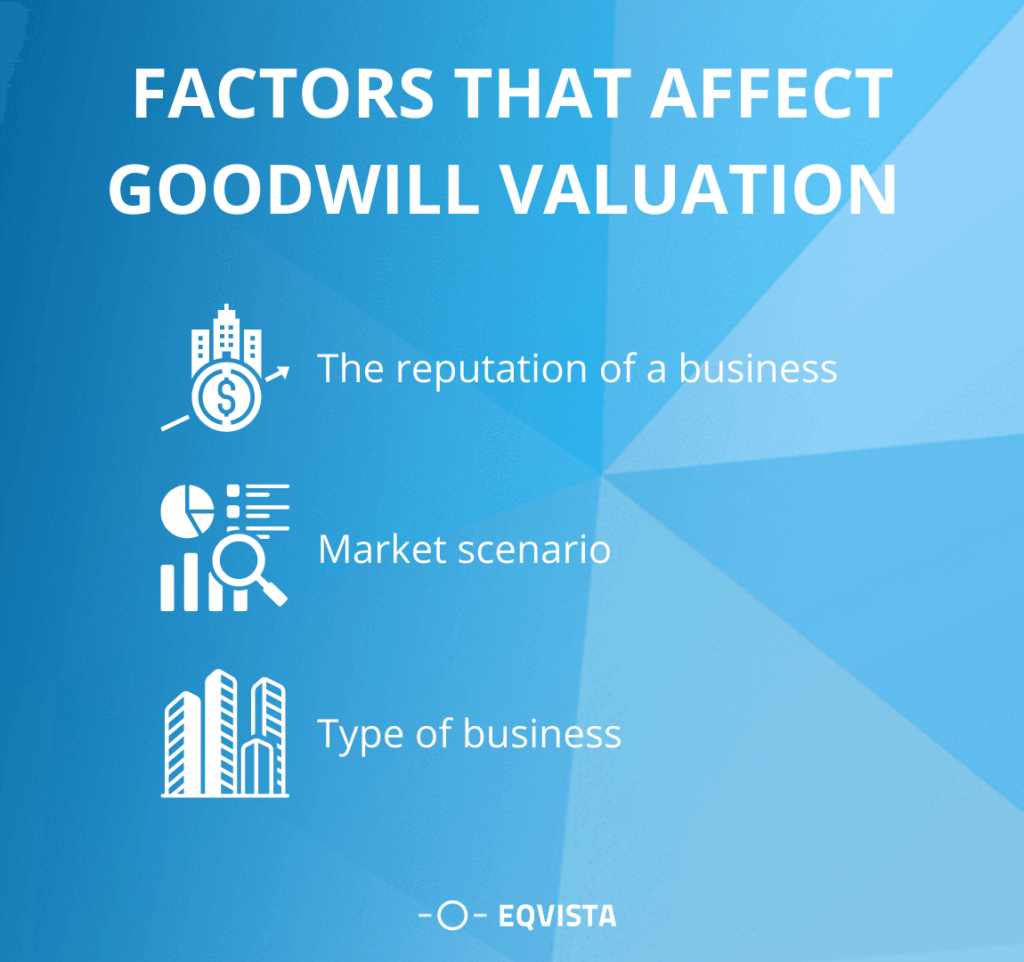 How does goodwill affect business valuation?

Goodwill has a significant impact on value since it mitigates the chance that a company’s profitability will suffer once it is sold. The difference between the acquisition price of the business and the fair market value of the tangible assets included in the sale is the goodwill value. Business goodwill is an intangible asset that a firm owns and is connected with its operations. The premium paid when a company is purchased is known as goodwill.

While goodwill is difficult to quantify, it is computed by removing the difference between a company’s purchase price and the fair market value of its assets and liabilities.

Get a high-quality goodwill valuation report with Eqvista!

The valuation of goodwill is a common occurrence during corporate mergers and acquisitions. Regardless of how long goodwill has been built, the value of goodwill is only recognized when the business is sold or transferred. And while you prepare your company for its goodwill valuation, keep in mind that you’ll also need to present them with your cap table. If you haven’t already begun using Eqvista to track your shares for free, now is the moment. To learn more, fill up the signup form and get started.