In this article, you will learn more about the concept of a profit-sharing agreement, its benefits, provisions, steps for implementation, and its limitations.

Businesses can only survive if they are making enough profit to sustain their operations. In today’s era, it’s essential to recognize the role of revenue sharing objectively. Profit-sharing is one concept that helps two separate companies run a business together without forming any new company. It is always a project-based deal between two companies.

The term “profit-sharing” means distributing the amount of money earned during the operations of any business or entity. It can also be termed as revenue sharing among the company owners, employees and shareholders.

What is a profit-sharing agreement?

A profit-sharing agreement is a contract between two different companies who work together for a similar purpose within a certain period of time. It is also referred to as an incorporated venture, where the companies remain as they are and do not merge as one company. The companies bring different values and skills to each other. Therefore, both are responsible for the division of profits and risk involved while working together. Before entering the partnership, the parties must be aware of the ratios they will use to distribute the profits and how they will spread the losses. Once the terms and conditions are mutually understood by both parties, they can enter into a profit-sharing agreement. 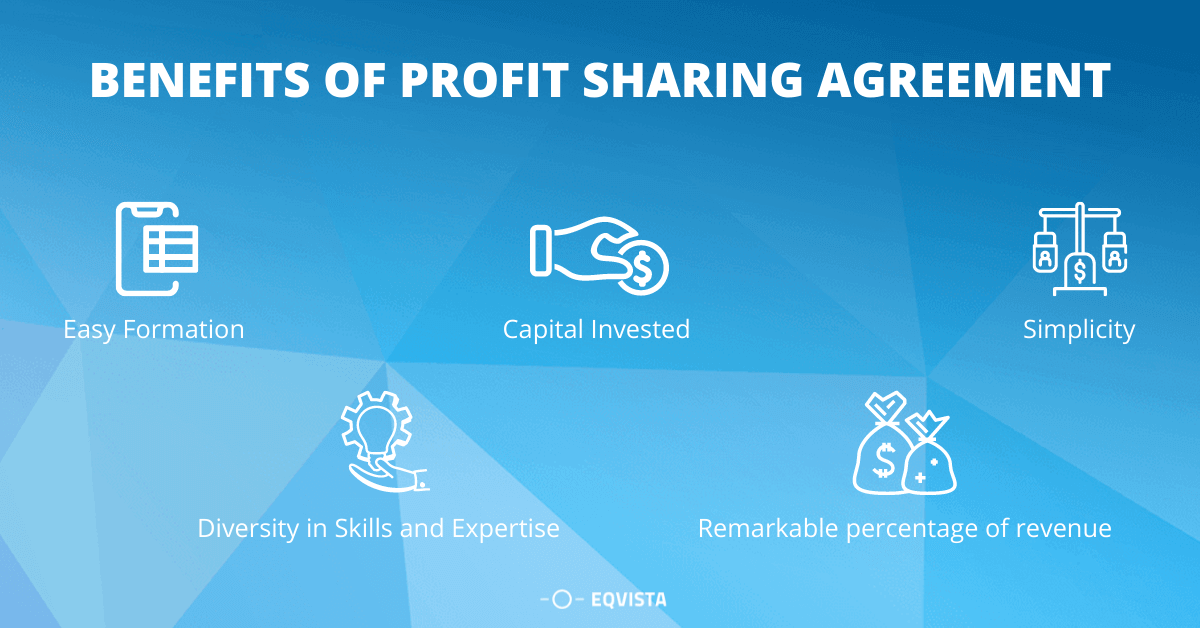 A profit-sharing agreement typically imposes limitations on what each partner may do with business assets. It also outlines what one should do if any of the partners pass away. For example, stipulate in the agreement that the remaining partners have the first option to purchase the remaining piece of the business from the deceased partner’s estate. In the agreement, there might be restrictions on the estate that limit the estate’s engagement in the business.

One holds the right to impose constraints on how the remaining partner liquidates the company and divides the earnings. The profit-sharing agreement typically contains the following clauses:

Steps for Implementing a Profit-Sharing Agreement

Initially, both the parties put forward their opinions and expectations from the partnership. The most crucial step in putting together a good profit-sharing plan is to have a clear vision of what you want to achieve with it. Profit-sharing arrangements are typically set up as a retirement benefit. Companies with an older workforce will benefit from this type of profit-sharing scheme. In a delayed profit-sharing scheme, you can get more people to participate.

Here are the steps to be followed while implementing the agreement:

It is important to understand that each partner should be legally and financially accountable for their actions. The profit-sharing agreement is always based on the assumptions that the current business is going to generate a good amount of revenue. If any partner doesn’t want to take accountability for their actions and wants to withdraw from the partnership, or if there are any conflicts, legal actions can also take place.

How does a profit-sharing agreement work?

Once a pool has been established, a distribution formula is made. It is a written plan that sets up a trust to hold the plan’s funds and creates a method for keeping track of the activities.

Partner A and Partner B, for example, create a block. Partner A is in charge of the majority of the small business’s day-to-day operations. The partnership agreement is created to indicate that “Partner A shall get 70% of earnings and Partner B shall receive 30% of profits each year” due to Partner A’s increased responsibilities. Partners might select how to split profits based on their responsibilities.

Suppose Partner A invests $400,000 and Partner B invests $100,000. In that case, the partners could include a condition in their partnership agreement that states, “Partners must distribute profits depending on the proportion of capital in the partners’ capital accounts on the last day of the year”. Partner A would receive 80% of the profits, while Partner B would receive 20%.

Partner A, for example, invests $400,000 and is responsible for the majority of the partnership’s decisions. Partner B invests $100,000 but does not give anything in terms of partnership responsibilities. The partners can agree that Partner A will earn 10% of profits while Partner B will receive 90% or vice versa.

Example of using a profit-sharing agreement

Two investors running two different businesses came up with an idea to start a new cafe on a profit-sharing agreement. Both of them decided to invest capital of the same amount along with basic assets (space, furniture). Both of them have decided to share the revenue after cutting the operational costs. This should be outlined in a profit-sharing agreement so that both parties have documented the split and know when they receive their profits. The amount of money that they will share will be 100% of the total revenue where both the partners will get an equal split which is 50% each. The further decision will be taken based on the operations of the business.

Profit-sharing agreement vs. 401k: How are they different?

A profit-sharing agreement is a contract between two partners doing a project together to share the profits earned, whereas A 401(k) plan is a tax-advantaged retirement savings plan that is offered by many American companies. It is called after a provision of the Internal Revenue Code of the United States.

When employees enroll in a 401(k), they agree to deposit a portion of each paycheck directly into an investing account. The employee has a variety of investment options to select from, most of which are mutual funds.

Employers offer their employees two types of retirement funds: 401(k)s and profit-sharing plans. The majority of 401(k) programs are supported by deferring employee salaries into the account. Some employers match employee contributions, resulting in a funding that includes both employee and company contributions.

A profit-sharing plan is wholly supported by the company, with no payment from the employees. Profit-sharing contributions are optional and depending on the company’s profitability. Both schemes have limitations, according to the Internal Revenue Service (IRS). Both types of plans adhere to the IRS age-based penalty and distribution requirements.

Sometimes it becomes hard for shareholders to manage their company accounts, shares, profits, and statements, which might also burden the businesses. Eqvista provides a more reliable and straightforward software to manage your entire profits and get you more opportunities. We also help provide you with a platform for managing your shares, cap tables, and company fillings. Not only this, we work in a transparent manner where we keep your needs and requirements at priority. Get in touch with us to know more!

83(b) election - A Complete Guide for Companies How can digital signatures be helpful in business? Startup Term Sheet Template Form 8594 - Everything you need to know Shareholder Voting Agreement: What You Need To Know Founder’s Guide to Equity Investment Agreement NVCA Term Sheet and Other VC Financing Model Documents Guide to Making a 50/50 Partnership Agreement The Definitive Guide to M&A Deal Structure & Agreement 4 Steps in Making a Convertible Note Agreement Tender Offer & Its Effect on Investors Right of First Refusal and Co-Sale Agreement Shareholder Register Investment Agreement Term Sheet Share Transfer Form Subscription Agreement Founders Agreement Shareholders’ Agreement What is a share certificate or stock certificate? Stock Certificate Template Do I need to issue a stock certificate for my company? What is a Board Resolution and when is it required? Tips for Taking Minutes for a Board Meeting Voting rights of a Shareholder – Basic Guide