Public Companies – Everything you must know

In this article, we will discuss the basic framework of public companies, including detailed characteristics and requirements.

You might have heard the term “public company” often in regard to the stock market. Public companies are listed on stock exchanges, and their shares are traded publicly. But, did you know that they are more than just the stock trading that you see in the news? Public companies are legal entities that must operate by a set of rules and regulations. They must also be managed responsibly that aligns the interests of their shareholders and those of all other stakeholders, including employees, government agencies, customers, vendors and the community. In this article, we will discuss the basic framework of public companies, including detailed characteristics and requirements.

Before the late 1980s, there were very few companies in the market. Today’s high-tech world is characterized by a plethora of public companies that are constantly raising and diluting capital through IPOs. But, what is an IPO? Well, IPO or Initial Public Offering is the process of selling shares of a company to the public for the first time. In order to conduct an IPO, a company must meet certain requirements under the Securities and Exchange Act Commission (SEC). While public companies in this regard refer to companies wherein the public has access to their shares, or in other words, the company that is listed on stock exchanges.

What are public companies?

In brief, public companies are ventures in which the ownership is widely distributed to the public via stock exchanges. The Securities and Exchange Commission (SEC) of the US regulates public companies that trade their shares on the stock exchange. Regulated public companies, by law, must provide potential investors with a multitude of information including annual reports, financial data, etc.

As such, public companies are transparent, and their operations are subject to the scrutiny of the SEC. Therefore, public companies generally have a diversified number of shareholders due to the fact that the shares can be bought or sold by anyone through the stock exchange. So, what are the pros and cons of public companies?

Public companies, especially those that have a huge number of shareholders, tend to offer greater potential for long-term investor returns. However, from the perspective of a company, here are a few advantages of being a public company: 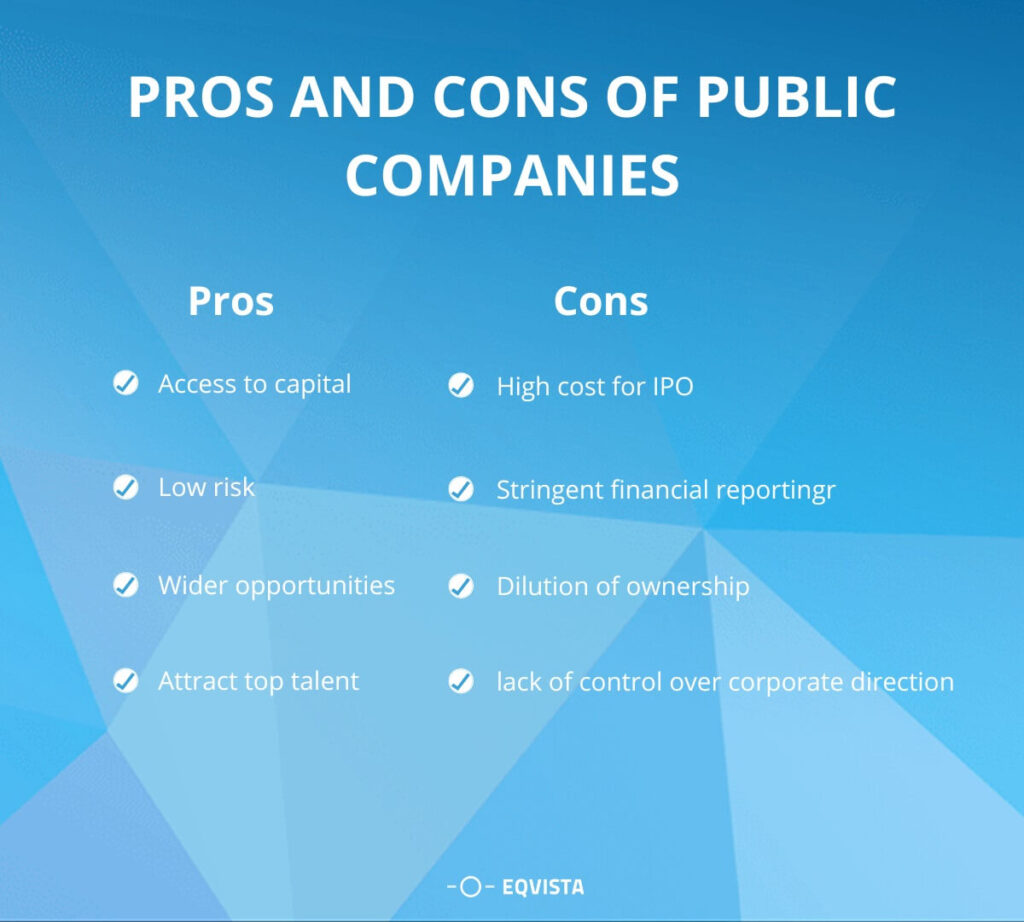 Example – To better understand the difference between public and private companies, let’s take a look at an example. Twitter, a social networking and micro-blogging website that was founded in 2006 and went public in November 2013. As you might know, recently, Twitter was acquired by Elon Musk on October 27, 2022, for $44 billion. Now, Elon Musk is planning to delist Twitter from the New York Stock Exchange and make Twitter a private company. Musk will soon reverse the IPO of Twitter and convert it into a private company. But, why would Musk want to convert Twitter into a private company?

Well, with no SEC regulation, better ownership rules, fewer reporting requirements, and less scrutiny, he might be able to achieve more of his business goals for Twitter. Additionally, private companies have greater flexibility and control over the direction of the company’s operations. As a result, it is likely that Elon Musk will be able to achieve a lot more in terms of value creation with Twitter as a private company, compared to when it was a public company.

From the initial registration of a publicly traded company until the dissolution of such a company, the SEC requires public companies to make a number of disclosures. The transparency and continuing disclosures are as follows:

You might wonder what if the company goes bankrupt, How to deal with the SEC in this case? What is the exact procedure? Well, before we get into the details of this matter, it is important to know what bankruptcy is? Bankruptcy is a legal proceeding that is initiated by a company due to financial difficulties and debts. If a company is unable to pay its obligations, it can file for bankruptcy and dissolve its existing business. The following are the main legal requirements that must be filed with SEC before a public company files for bankruptcy:

Efficiently run your business with Eqvista!

As we have discussed the concept of public companies, the characteristics and the various disclosures that they are required to make, it is clear that the nature of a public company is quite different from a privately held company, especially when it comes to managing a huge number of shareholders. Are you looking for professional assistance from an expert in managing your shareholders? Eqvista provides a web-based platform that allows you to manage your shareholders and prepare 409A valuations in real-time. With our powerful tools, you can streamline your management, comply with the requirements of the SEC and provide better value for your shareholders. To know more about our services, contact us today!