Impairment is the period during which the market value of an asset is less than the valuation recorded on the balance sheet of an organization.

Impairment is a term used in accounting to describe a permanent decrease in the value of a company’s assets (both tangible and intangible). When evaluating an asset for impairment, the entire profit, cash flow, or other benefits that the asset can generate is regularly compared to its existing book value. If the asset’s book value exceeds its future cash flow or other benefits, the difference is written off, and the asset’s value decreases on the balance sheet. The term “improperly” is most usually used to describe a significant loss in a fixed asset’s recoverable value.

If the carrying value of an asset exceeds the amount that can be recovered through use or sale, it is said to be carried at more than its recoverable value. In this case, the asset is classified as impaired, and the entity must recognize an impairment loss under HKAS 36. If any of these indicators are present, an entity must produce a formal estimate of the amount recovered. If there is no indication of an impairment loss, this standard does not require an entity to estimate the recoverable amount formally.

What is Impairment of Assets?

Asset impairment is frequently confused with asset depreciation. While the latter occurs due to an asset’s age or wear and tear throughout regular operation, asset impairment refers to a more significant decrease in asset value as a result of extenuating circumstances such as changes in regulations, market conditions, environmental conditions, or technological advancements—any change that renders the asset obsolete, less valuable, or too damaged to use as intended. Impairment is the period during which the market value of an asset is less than the valuation recorded on the balance sheet of an organization. There are three types of impaired assets: fixed assets, intangible assets and investment in subsidiary/equity.

Difference between Depreciation and Impairment of Assets

The difference between an asset’s carrying amount and its fair value is the amount of an impairment loss. Because an impairment loss affects the asset’s carrying value, you may need to increase the amount of periodic depreciation being charged against it to compensate for the lower carrying value. Assets must be tested for impairment at the lowest level where identifiable cash flows exist that are substantially independent of other assets’ cash flows.

To further explain the difference between the two, here is a table showing how depreciation and impairment differ in definition, frequency and relevance.

Why Does Impairment Happen?

Impaired asset accounting provides a more accurate picture of a company’s overall financial health. An asset impairment record informs investors, financial institutions, and firm executives that a particular asset is now worth less than predicted. Some impaired assets are regarded beyond management’s control, while others, such as those incurred in M&A or AR, may indicate poor leadership in terms of business value stewardship.

For example, a warehouse that has been devastated by a cyclone is harmed due to no fault of management. If, on the other hand, leadership provided credit without obtaining written repayment terms or in amounts larger than the company could afford to lose, and the company has a poor accounts receivable turnover ratio, such unrecoverable AR assets fall on leadership.

Accounts receivable, as well as long-term assets like intangibles and fixed assets, are the most prone to become impaired. When the value of an impaired asset is written down on the balance sheet, a loss is also recognized on the income statement. When a corporation pays more than book value for a group of assets and then decreases the value of those assets, this is known as an asset impairment. Company XYZ registers $5 million of goodwill as an asset on its balance sheet because it paid $15 million for assets worth $10 million.

Impairment Testing for an Impaired Asset

Before making an impairment judgment, calculate an accurate and current fair value for the asset. Then, on the company’s balance sheet, compare that value to the amount specified as carrying value or book value. If these figures are the same, the asset’s previous value is preserved and no balance sheet adjustments are necessary. However, when goodwill must also be accounted for on the balance sheet, the accounting becomes a little more complicated. Intangible assets, such as your company’s brand name or reputation, or assets that are not separately traceable in M&A, are examples of goodwill.

These aim to define the procedures that an entity must follow to guarantee that its assets are carried at their recoverable value. The higher an asset’s fair value, the lower costs to sell, and it’s worth in use is the recoverable amount of that asset or cash-generating unit.

HKAS 36
also lays out when an entity should reverse an impairment loss and what disclosures should be made. The center precept in IAS 36 is that an asset should no longer be carried within the monetary statements at extra than the very best quantity to be recovered through its use or sale.

When should HKAS 36 be applied in accounting for the Impairment of assets?

If the carrying value of an asset exceeds the amount that can be recovered through use or sale, it is said to be carried at more than its recoverable value. Under HKAS 36, the asset is classified as impaired and this must be recognized as an impairment loss.

A cash-generating unit is an identifiable asset group that provides money inflows to a company; these cash flows are independent of those generated by other types of assets. For example, a company has 50 hotels worldwide. Therefore, this group of assets is considered as a whole a cash-generating unit.

Triggering Factors for Impairment of Assets

According to experts, reviewing each asset for impairment on a regular basis is futile. A more successful technique is to respond quickly to triggering events that suggest potentially negative consequences on assets. A company’s capacity to identify such triggering events and rally a quick response is critical to success with that strategy.

Pros and Cons of impairment testing

Impairment testing has its good and bad side, which one must take note of: 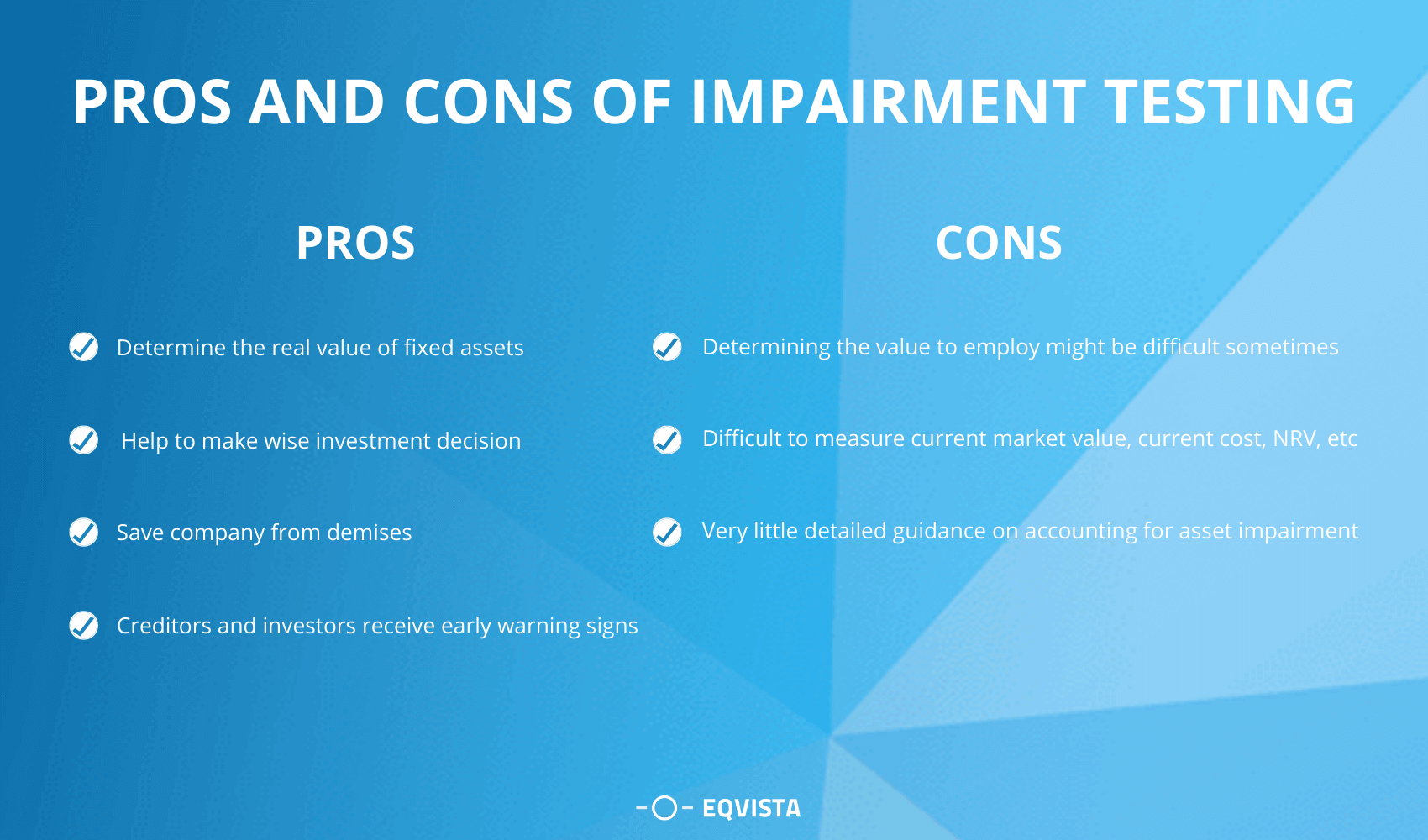 It is really important to test the impaired assets, and it helps the companies to get the real value of fixed assets:

There are several drawbacks of impairment testing which company owners or even companies do not even require:

A drop in net carrying value (acquisition cost minus depreciation) of an asset that is greater than the future revealed cash flow of the same asset is referred to as an impairment loss. When assets are sold or abandoned because the company no longer expects them to enhance long-term operations, this is known as impairment. Although impairment losses often result in a tax deferral for the asset, this is not the same as a write-down. Stockholders of a publicly traded corporation may lose ownership of their shares, resulting in a reduced debt-to-equity ratio, depending on the type of asset being impaired.

How to determine impairment loss?

The first step is to figure out what causes an asset to be impaired. Changes in market conditions, new laws or regulatory enforcement, personnel turnover, or decreasing asset functionality due to aging are all possible drivers. In other cases, the asset may be in perfect working order, but new technology or procedures may cause the asset’s fair market value to plummet dramatically.

“Recoverable amount” is another phrase for this figure. After the fair market value has been determined, it is compared to the asset’s carrying value as shown on the company’s financial statements. Because the carrying value is already recorded in earlier accounting records, it does not need to be recalculated at this time.

The asset is considered impaired if the calculated expenses of holding it exceed the calculated fair market value. If the item in question is going to be sold, the expenses of selling it must be factored back into the net of the future net value minus the carrying value.

Estimation in the impairment test

Depending on whether the debited amount was altered by the new, adjusted fair market valuation stated above, impairment losses are recorded using the cost model or the revaluation model. Even if the corporation receives a little tax benefit as a result of impairment, the realization of impairment is detrimental to the company as a whole.

It frequently indicates the need for more reinvestment. The asset is considered impaired if the calculated expenses of holding it exceed the calculated fair market value. If the item in question is going to be sold, the expenses of selling it must be factored back into the net of the future net value minus the carrying value.

Sometimes checking and testing the company assets can be time-consuming, especially when you examine the various approaches for evaluating your company and determining its economic worth. Overall, it’s safe to say that one method isn’t necessarily superior to another. If you require auditing and testing the company assets, your best line of action will be to employ a professional appraiser. As we’ve explained, this expert will be able to provide the most thorough and objective assessment of your company assets and their impairment testing.

Eqvista helps in doing the most effective valuation and if you are a business owner looking for one. We are here to help. Get in touch with us by filling up a sign-up form and getting free consultation today.

Why and how to value digital assets? How to value a software asset? How do Liquidity Events work in private companies? A Complete Guide to Capital Asset Pricing Model (CAPM) How to Calculate Tangible Assets Ultimate Guide to Weighted Average Cost of Capital (WACC)