The Volcker Rule and Venture Capital

It is rare that new pools of capital become accessible on an overnight basis. The Volcker Rule’s covered funds section was updated on October 1, 2020, to allow banks to invest in venture capital funds once again. This was the first time this had happened since 2008. We will discuss how we arrived at this point, what it means for venture capital, and what fund managers should consider due to this policy shift.

After the 2008 global financial crisis, policymakers were concerned that banks invested their own capital in financial products that may lose value and expose depositors to losses or cause bank failure. Policymakers believed such a failure would disrupt the financial system. Their reaction? Outlaw it.

Revising this rule not only helps to support creative enterprises and jobs but may also assist in spreading money geographically. Naturally, prominent cities like San Francisco and New York draw the most venture capital, whereas investment is scarcer elsewhere. Using a nationwide network of banks with regional competence could expand capital allocation beyond large epicenters to additional states and towns.

This will help small enterprises and start-ups create jobs and expand the economy. By boosting the flow of funding to small firms and start-ups, these banking entity investments can help the broader financial system.

Venture capital (VC) is a type of private equity and financing provided by investors to startups and small firms that are thought to have long-term growth potential. Well-to-do individuals, investment banks, and other financial institutions are common venture capital sources.

Role of venture capital in a company

Venture capitalists are required because they help to smooth out the creative destruction process and help businesses change themselves from chaotic organizations to well-oiled ones. Therefore, venture capitalists have an important role to play in molding the economic futures of countries around the world. It is often stated that venture capitalists bridge the gap between the public and private sectors. However, while many governments actively fund new businesses, the bureaucracy and red tape involved in official decision-making often suppress startup funding and the incubation process.

What is the Volcker Rule?

The Volcker Rule is a federal regulation that prevents banks from engaging in certain investment activities with their own funds and restricts their transactions with hedge funds and private equity funds, often known as covered funds.

The goal of the Volcker rule 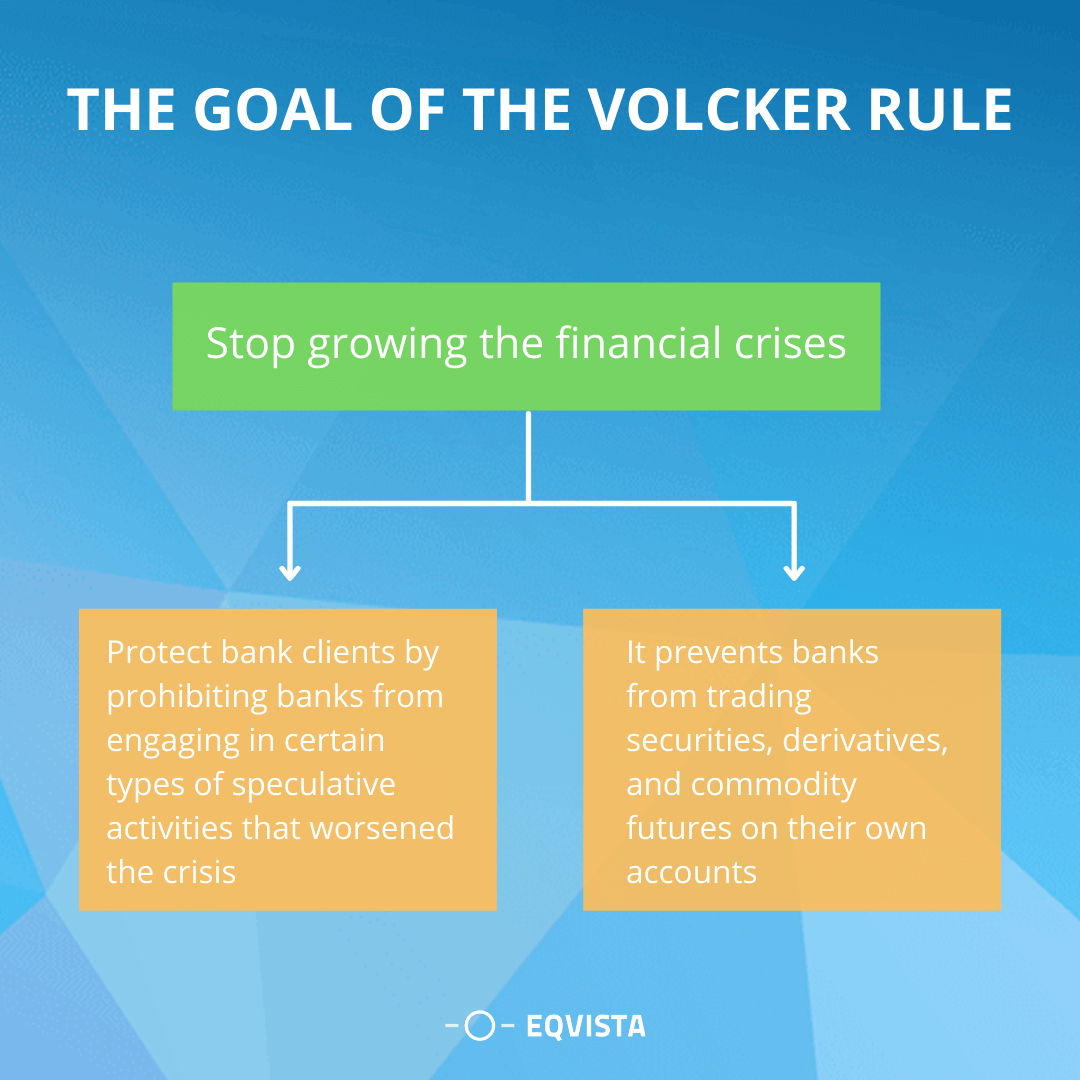 The Volcker Rule originated in 2009 when economist and former Federal Reserve Chair Paul Volcker recommended a piece of legislation in reaction to the growing financial crisis (and after the nation’s top banks had significant losses from their proprietary trading units). The goal was to safeguard bank clients by prohibiting banks from engaging in certain types of speculative activities that worsened the crisis.

Essentially, it prevents banks from trading securities, derivatives, and commodity futures, as well as options on any of these products, on their own accounts (client funds). Volcker ultimately sought to re-establish the distinction between commercial and investment banking. This distinction existed previously but was legally abolished in 1999 as a result of a partial repeal of the Glass-Steagall Act.

Why did angel investors criticize the Volcker rule?

There has been widespread criticism of the Volcker Rule from many angel investors. The US Chamber of Commerce asserted in 2017 that the Volcker Rule’s costs outweigh its advantages and that a cost-benefit study was never conducted. It was claimed at the FEDS that the Volcker Rule would lower liquidity as banks’ market-making activities would be limited. Also, the International Monetary Fund (IMF) has claimed that enforcing restrictions to avoid speculative bets is extremely difficult.

How does the Volcker rule work?

To understand how the Volcker Rule Works, one must comprehend the Glass-Steagall Act of 1933. Glass-Steagall was part of the 1933 Banking Act. It classified banks as depository or investment institutions.

An investment bank can utilize its money to trade securities and make other risky bets. They can’t take deposits, open checking or savings accounts, or do anything else like a commercial bank.

All retail banking is done through a depository institution. Notably, they can accept customer deposits and pay interest. The FDIC insures banks. i.e., In the event of a bank failure, consumers will be paid up to $250,000 per account.

Implications and Exceptions of Volcker rule for VC funds 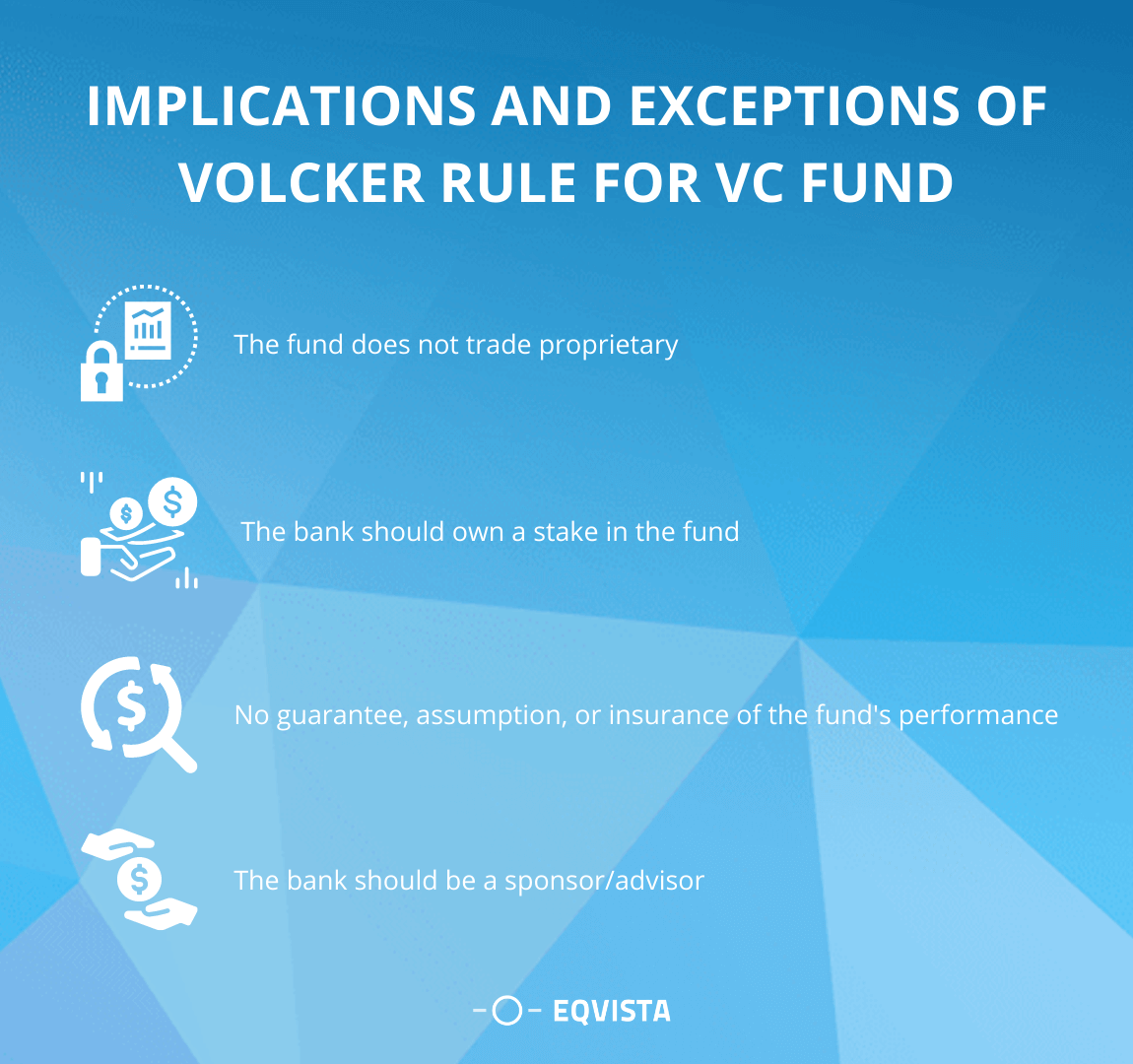 To invest in venture capital funds, a bank must still adhere to conflicts of interest, investment risk, and soundness restrictions. The regulations are tighter if the bank sponsors a venture fund, which means it is a general partner or controls a majority of directors or managers. Also, In June 2020, regulators decided to exempt venture capital funds from the definition of covered funds, allowing banks to invest in eligible VC funds.

The Final Rule exempts an issuer that fits the definition of a venture capital fund in 17 C.F.R.(Code of Federal Regulations) as defined under the Current Rule.

If a fund meets the criteria listed below, banks may invest.

A cover fund under Volcker Rule is defined as the following:

This means that most private funds that are not deemed investment companies under the ICA are covered funds, which considerably restricts banks

Under SEC regulations, a private fund must meet all of the following criteria to qualify as a venture capital fund:

Future of the Volcker rule

In one study released in June 2017, the Treasury said it supports the Volcker Rule’s prohibitions on proprietary trading and recommended significant revisions to it. The study recommends exempting banks with assets under $10 billion from the Volcker Rule. The Treasury also advised simplifying and refining the definitions of proprietary trading and covered funds, as well as loosening the rules to allow banks to better hedge their risks.

Based on the Treasury’s recommendations, the Office of the Comptroller of the Currency (OCC) has spearheaded efforts to amend the Volcker Rule since June 2017. It’s unclear when any proposed adjustments would take effect, although it might be months or years. Regulators released a Volcker rule provision in June 2020, allowing lenders to invest in venture capital funds and other assets. Hence the Volcker rule requirements meet the needs.

Get your business valuation from Eqvista!

In order to meet the Volcker Rule Exclusion, funds that wish to raise capital from banking organizations need to ensure that they are in fact venture capital funds under applicable SEC laws. Looking for a business valuation for your company’s funding? Eqvista is here to help! Learn more about our different valuation services by contacting us today.