How founders use employee stock options in a Startup?: Cap Table Case Study 3

Dreaming of owning a multinational company some day? In order to achieve this one day, you would need to be the best entrepreneur possible with the knowledge to handle anything that comes your way. And for this you need to know all about your company shares and cap table, which you may know a little about already.

It’s also important for you to be well-versed with all the technical financial and operating terms. There are many legal agreements you need to know about as well. With all these new terms, it is very normal for entrepreneurs to feel overwhelmed. To help you out a bit and to help you understand how to track your company shares better, we have shared an example with you today.

Note: All the things mentioned in this case study is purely fictitious and has been developed only to help entrepreneurs understand terms and situations better. If you find any resemblance to any real situations or firms, please regard it as coincidence. For any questions or concerns, you can connect with us directly.

To understand a simple scenario with issuing ESOs and handling them with the Eqvista application, we have an example in mind. Let us take three founders: Damon, Stefan, and Klaus.

These three founders were great school and college friends. They came together one day to discuss about the future and decided to work together on a business idea. After some brainstorming, they came up with a unique idea to create robots that would be the eyes and ears for handicapped people. Obviously, the idea they had in mind needed some technical expertise. Thanks to their degree in engineering, they had the right knowledge to begin with the production.

Damon wanted the robot to be something that was affordable so that people who are not wealthy can also benefit by using the product. All they needed now was some researching equipments to prepare the final product, after which they could easily move ahead with their plan.

Once they were ready with their idea, they sat down to prepare their business plan that would have all the details of their venture. Preparing a business plan is essential as it helps you create a goal for your business. This can be used to follow the right path towards making your business a success. Keeping this idea in mind, Stefan was determined to create the perfect business plan. He ensured that everyone gave time to prepare the plan.

While they were working on the business plan, they also began to discuss about their ownership and how they would be dividing it. And most importantly, they needed to work on the name of their business. After some thoughts, they came up with the name – Robocap Inc. For Damon, the name said everything about the company and what they wanted to do.

After all this was decided, they made a decision to meet a lawyer and finalize the things to begin with the research phase. Klaus got his good friend who is a lawyer. They then came together and discussed how the shares would be divided. The important documents were prepared by the lawyer, as the lawyer helped in splitting the ownership stakes. The ratio of the ownership stakes were 31.25 : 31.25 : 37.5, where the highest percentage was for Klaus due to his initial bootstrapping investment.

To prepare the company documents and set up the company, the initial funds were taken care of by Klaus. With this investment and his expertise in the field, he was designated as the CEO of the company. The knowledge and experience that Klaus had was more as compared to Damon and Stefan.

Moreover, the three decided to keep about 20% of the company shares in an equity pool. These shares were kept to be used as employee compensation later on or for any future investment rounds. After all this was decided, the lawyer helped the three founders in setting up their company so that they can begin their journey towards success and help the world.

Now that the company documents were ready, here is how the ownership stakes were divided during the initial stages of the company:

Robocap Inc. was incorporated in Delaware as a C corporation. This business entity was basic for most venture-backed company. In short, the company was incorporated with just 10,000,000 shares of Outstanding Common Stock. At this moment, the cost per share was just $0.001 per share, as the company was just created. To keep track of all the 10 million shares of the company, Damon decided to use a cap table application.

A cap table application helps you record, track and maintain all the shares in your company. Unlike a traditional excel sheet that was once used for creating cap tables, app based cap tables are much easier to use and understand. You would also be avoiding time consuming complications using online software. Damon had learned about a cap table application from one of his friends. This application was Eqvista. The three founders found this application the best choice in the market and began to use it.

Damon, Stefan and Klaus came together to create the company profile on this application. After which, they added all the important data needed before they could make their own profiles. Once they had organized their ownership on the Eqvista app, they could see what they owned in a simplified way.

For you to understand better, I have attached a screenshot below to help you understand how the ownership looks on the cap table right now. With the Eqvista app, you would be able to see all the details in real time. This means that if there is any change in the shares (new issuances, sales or purchases of the company shares), you would be able to see it through the app right away. 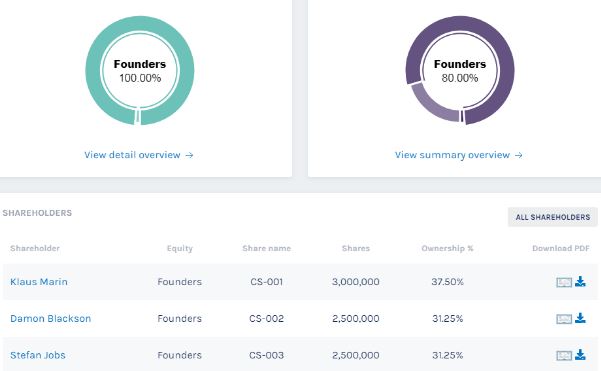 The three founders also decided to keep about 2,000,000 shares on the side as the ESO pool (Employee stock options) on the cap table. The updated cap table can be seen in the screenshot below. 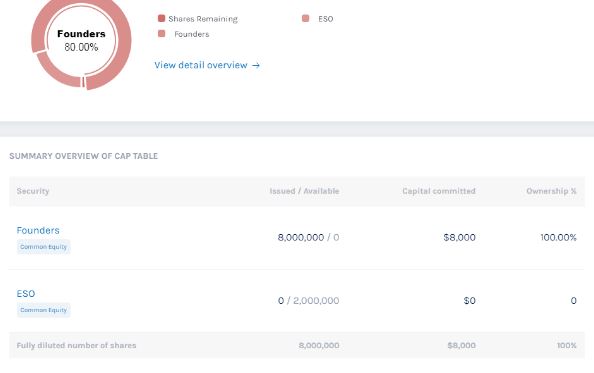 With all these updates, it can be seen that the cap table was growing and all the details could be seen clearly with the help of the Eqvista application. And as the company grew, you would find the cap table turning into something more complicated. Which is why Damon had taken up the Eqvista application to help things be easier for them as they track all the shares in their company.

Now that everything had been sorted out, it was time to begin working on the production of the robots. For this, the founders needed raw materials and tools. And since Klaus had promised to fund the company initially, the very first capital that came into the company was about $50,000. This was taken out of the savings that Klaus had kept for the future.

The process of using your own money for your own business is called bootstrapping.

Hence, Klaus had bootstrapped the business with the savings that he had made. It was important to get a head start with the production as they needed to create a prototype that would be sold in the market. This would help them understand the response the market would have towards their idea.

In this case, they decided to start small, and Klaus had the amount that the company could use to start off. With the required capital in hand, the three got to work.

They first looked for a place where they could set up all their equipment and begin with the robot production. Once they found a place, Stefan got the needed equipments and raw materials with the funding. As soon as everything was in place, the three got to work and began to produce their very first low-cost robot that would help the handicapped.

After a month of hard work, they were able to successfully build a robot that would help handicapped people. This piece was then tested in the market. They had offered the piece to a doctor who handled handicapped patients and the piece worked wonders. Due to this, the news began to spread like wildfire and Robocap was flooded with many new orders.

Damon, Stefan and Klaus were delighted with the response they got and they began to work towards preparing the next orders. But for this, they needed more labor due to the large amount of order and the little time that they had. This meant that they needed to hire some staff to join the company. However, they faced another problem, as they lacked the capital to offer high salaries to these employees. And if they did not hire new employees, they would not be able to produce the number of items that they needed. That is where they decided to make use of the shares they had kept aside during the start of the company.

As per their plan, they wanted to hire about 5 to 7 experienced workers who would be paid a basic salary until the company reached a sustainable level. These employees would be given employee equity compensation through Employee Stock Options (ESOs) to compensate them for their hard work.

After some planning, they decided that these employees would receive the ESOs that vested over time. These options also included a cliff period of 1 year, so the employees would need to work with the company at least 1 year before they could get shares in the company. This would make sure that the new staff would work for a longer time for the business.

Once this was finalized, the hiring process began and they successfully hired 5 staff who had a background in robotics and could be of huge help to the company. These employees were offered with the options as promised. Each new staff was offered options of 200,000 options, or 2% of the total number of shares. These were as below: 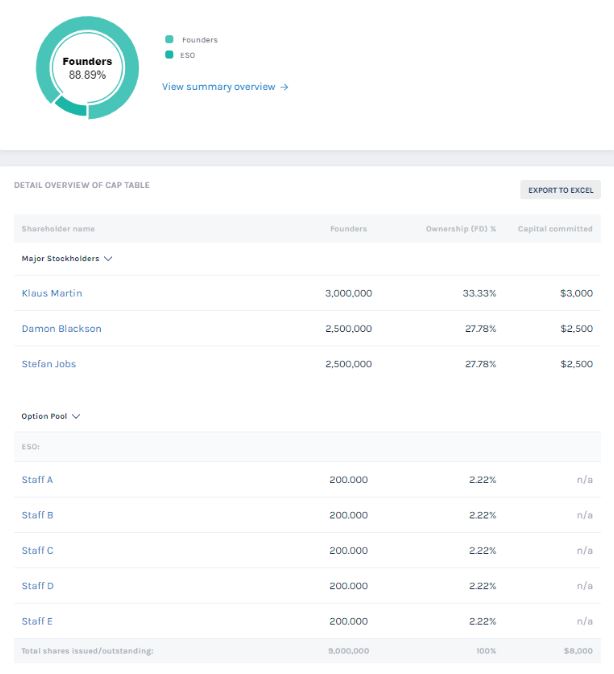 You can see with the issuance of new options to these staff, the existing shares of the three founders also become diluted as well. Also, the shares can be sold to these employees at a discounted rate, which is determined at the time of the deal. For the deal to be made official, agreements were made and both the parties signed on the agreements after agreeing on the specific conditions discussed.

Note: Find out all about ESOs here in details.

In this story, it can be seen that even though the founders had the amount to run a company at first, they still needed to use the equity of the company as compensation for hiring new employees. But as the company grows and the founders decide that they need more capital, they might need to raise a new funding round.

With all these things, you should not forget to keep updating your cap table. As soon as you incorporate your company and become a founder, it is better to begin recording all the data in your cap table. And if you are wondering which application is the one that you can rely on, then try out Eqvista. You would be able to make the overall process simple just as Damon, Klaus and Stefan did. Find out more about the Eqvista application here!